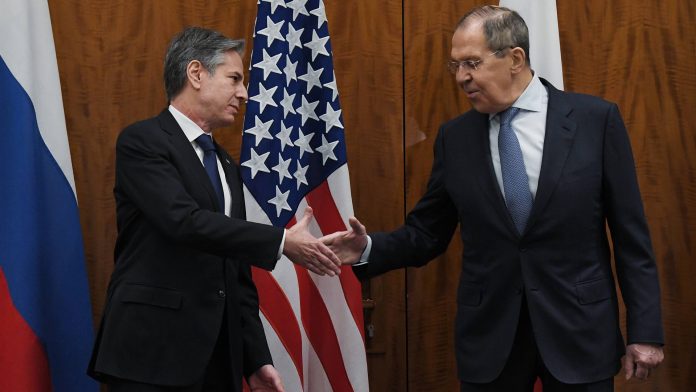 At the beginning of a meeting with US Secretary of State Blinkin, Russian Foreign Minister Lavrov called for a concrete response from the US and NATO to Russia’s demand for security guarantees. Blink responded with a warning.

The foreign ministers of Russia and the United States met in Geneva to discuss the Ukraine crisis. Russian Foreign Minister Sergei Lavrov and his American colleague Anthony Blinken renewed their positions in statements at the beginning of the talks. Lavrov said he did not expect a breakthrough from the meeting. What he expects is a “concrete response to Russian demands”. The Kremlin recently presented NATO with a list of far-reaching demands. Among other things, Moscow demands the written abandonment of NATO for further eastward expansion.

US Secretary of State Blinken also said he did not expect a breakthrough. Nevertheless, he hopes that he will be able to keep the path of diplomacy open in order to reach a peaceful solution. “The talks are part of an ongoing effort to de-escalate the situation and avoid further aggression by Russia against Ukraine,” Blinken said. And renewed his warning of a Russian invasion of Ukraine. This would entail a “collective, rapid and serious” response, he said.

Shortly before the meeting, the Russian government reaffirmed its far-reaching demands for the West. According to the Ministry of Foreign Affairs in Moscow, NATO must withdraw its foreign soldiers, their “material and weapons” from all countries that were not part of the defense alliance until 1997. This also applies to Bulgaria and Romania.

The West has been threatening Moscow with massive sanctions over the conflict for weeks. US Secretary of State Blinken is currently in Europe trying to find a diplomatic way out of the crisis. Before meeting Lavrov in Geneva, he held political talks with allies in Kiev and Berlin on Wednesday and Thursday.

Joe Angerer, ARD Moscow, on the meeting of the US and Russia foreign ministers

The conflict between Russia and the West over Ukraine has recently reached its climax. In the past few weeks, Russia has massed tens of thousands of soldiers, tanks and artillery on the border with its neighboring country, which is why the West fears an imminent Russian attack on Ukraine. Russia says the troop transfers take place on its territory and therefore do not threaten “anyone”. Instead, Russia feels threatened from the outside.