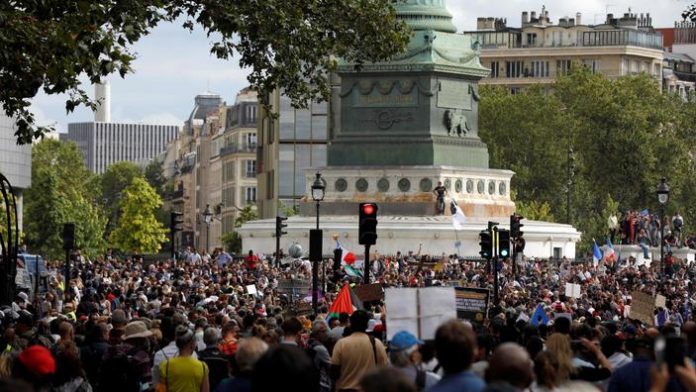 On Saturday, more than 20,000 people demonstrated in southeastern France against the commitment to the vaccine, the generalization of the health card and the work of the government in motley processions that also combine “yellow vests” and anti-vaccines.

In Montpellier, the demonstration gathered 8,500 people, according to the prefecture, a number that rose sharply from 5,500 a week earlier. On the Comedy Square, the demonstrators gathered the steps of the Opera and the Three Graces Fountain, on which some ascended the cry of “freedom” and sang one of the favorite songs of the opponents of President Emmanuel Macron: “We are there, we are there, even if Macron does not want … ”, a journalist noted In Agence France-Presse. In the procession, Maria Cassin, a 52-year-old nurse from Montpellier, was vaccinated, because she was fighting for the right to opt out.

In Nice, mobilization was provided – 6,500 people according to the police – a little more than the previous week, when 6,000 demonstrators took part.

In Aix-en-Provence (Bouches-du-Rhone), more than 2,200 people demonstrated in the city center on Saturday morning and 3,000 people gathered in Avignon, the capital of Vaucluse, at the start of the afternoon without incident, according to police. .

In Marseille, a procession gathered in the old port at 2 pm before heading to the province as police used tear gas to prevent protesters from getting too close, an AFP journalist noted.

The crowd was very heterogeneous, with thirty retirees, people waving the flag of communist or rebellious France (LFI), others wearing the French flag with the Lorraine cross and a few yellow jackets present.

See also  Is the hospital near you a good health care facility? Take the test!

This is known so far about the delta variant – the...