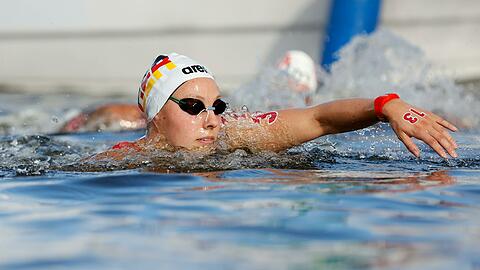 Despite a strong open water swim performance in Würzburg, Leoni Peak, on Wednesday morning (1.30am CET, 8:30am local time) I rose a bit frustrated at first out of the waters of Odaiba Marine Park. At the Olympic Games in Tokyo, the 24-year-old swam in fifth place in the 10 km race, although for a long time she was among the top three swimmers, and in some cases led the field. The Olympic champion was 11-time world champion Ana Marcela Kona of Brazil, ahead of Sharon van Ruandal of the Netherlands, who won gold in Rio in 2016, and Karina Lee of Australia. The second German in the race, Finya Wonram, crossed the finish line in 10th place.

Beck made herself strong from the start in her first Olympic open water race, even taking the lead on the first lap and then staying on top – initially behind American Ashley Twitchell and the Brazilian being the hugely popular. It looked as though the tough conditions in the setup – including allegations of sexual assault on the wings against her coach Stefan Lorz – had strengthened rather than weakened her, giving her the determination she needed in such a race.

Even when she was third in the Tokyo heat (water temperature was 29.3 degrees initially) she missed her drink at third of six supply stations, she couldn’t stop it. Still in third place one lap later, after a total of six kilometres, she crossed the pier again, where her father Alexander Beck, who was also the German open water team doctor, was able to provide proper care this time. “Drink well now, Leonie,” said the doctor, who had previously warned his daughter of the heat in Tokyo and the difficult conditions that resulted, and she went again. On the way to the medal, which at that moment seemed close enough to touch.

The fact that she briefly swam to fourth, and among other things let Van Ruandal overtake her, said nothing at first. Because in the penultimate turn of seven laps, the Würzburg rider led again after a good hour and a half with a solid performance – two seconds ahead of American Twitchell. From the German point of view, the difficult question remained: can you keep up with this pace?

Not quite, was the honest answer. With a good 500m to go, Beck pulled back a bit, but still held up well in third, 2.1sec off being the leader in the meantime. Even Australian Karina Lee pushed herself in front of her. From this point on, Beck lost contact with the top three and in the end had to be satisfied with a fifth place despite a really strong race.

The Ethics Committee of the German Football Association: Continuing unrest