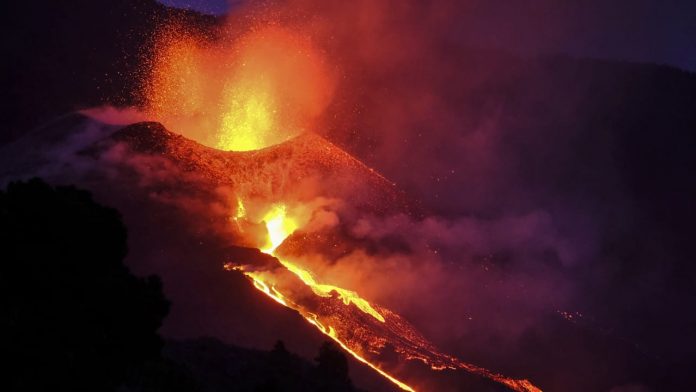 The erupting volcano on the Canary island of La Palma has become even more dangerous. The lava is now emerging again from two other slits in its cone.

The volcano is “much more aggressive” than it was when it erupted two weeks ago, said Miguel Angel Morquinde, technical director of the Volcanic Emergency Department in the Canary Islands.

Scientists recorded eight new earthquakes, measuring 3.5 on the Richter scale, overnight. The blast threw gas and ash into the air up to six kilometers away, according to authorities.

The evacuation of more than 6,000 people since the outbreak on September 19 has helped ensure that there are no deaths.

The La Palma government has announced that sulfur dioxide values ​​in the area have risen, but do not pose a health risk. However, she advised residents to stay home. It also recommended that islanders wear protective eye masks to protect themselves from the heavy volcanic ash rain.

Scientists estimate that the volcano has released about 80 million cubic meters of molten rock so far – more than double what was emitted when the island erupted in 1971.

The lava has so far destroyed or partially destroyed more than 1,000 buildings, including homes and agricultural infrastructure, and buried about 709 hectares of land.

La Palma, in which about 85 thousand people live, and they live mainly from fruit growing and tourism, belongs to the volcanic Canary Islands, an archipelago located in northwest Africa belonging to Spain.

The island is about 35 kilometers long and 20 kilometers wide. Even if the volcano is still active, life continues as usual in most parts of the island.