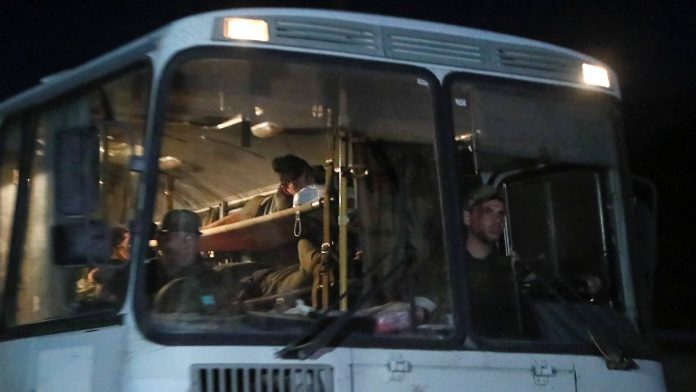 For some of the wounded fighters at the Mariupol Steel Plant, the encirclement probably ended: an eyewitness reported that buses were transporting soldiers from the Azov Regiment to a city controlled by Russia. However, it is not certain if they are safe there.

In Mariupol, after weeks of siege, Ukrainian soldiers are being moved away from the Azovstal steel plants, which are surrounded by Russian units. A Reuters witness saw about a dozen buses leaving the huge factory building. At first it was not possible to determine how many Ukrainian soldiers were on the buses. It was also not clear if there were any casualties on the buses.

The commander of the besieged forces in the steel factory explained in a video clip that he was carrying out orders from the high command to save the lives of the soldiers. But he left open what exactly he meant. He did not mention the possibility of a surrender. The Ministry of Defense in Moscow had announced earlier that an agreement had been reached on the evacuation of the wounded. They will be taken to Novoazovsk for medical treatment. The Russians control the city.

Deputy Defense Minister Hanna Maliar said she declined to comment on television so as not to jeopardize the operation. “Since the process is underway, we cannot say what is currently happening.”

Meanwhile, four trapped young women fighters travel across Europe and seek international help to free them. “We don’t know which country can really help us, so we are turning to everyone,” Olha Andrianovna said during the ladies’ visit to Paris on Sunday. Andrianovna and three other wives of Ukrainian soldiers left Kyiv on April 23 and have so far stopped in Poland, Germany and the Vatican, where they were received by Pope Francis for a short meeting.

Andreanovna said that the situation at the steel plant is so critical that “every day it takes six months or a year.” There is no longer any food in the steel mills, and water is scarce. Fighters will have to share a few cups and can only “take a sip every six to eight hours”. Since the bombing of a military hospital in the industrial complex, soldiers have had to “perform surgery and amputations without anesthesia.”