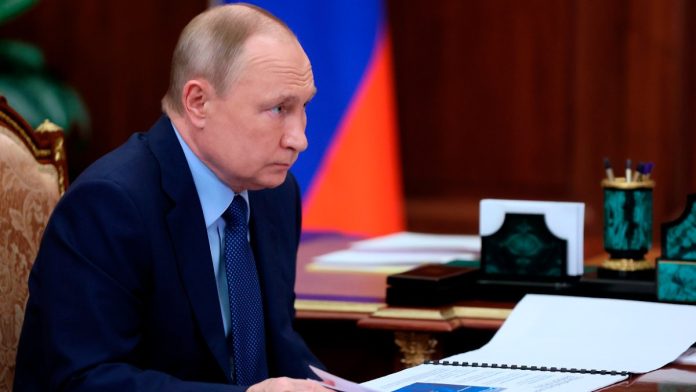 Putin and Biden want to talk about Ukraine

The foreign ministers’ meeting clearly laid the groundwork: US President Biden and Russian President Putin want to meet at least roughly at the Ukraine summit next week. The situation at the border remains tense. Kiev fears an invasion “end of January”.

Amid tensions on the Russian-Ukrainian border, US President Joe Biden and Russian President Vladimir Putin are likely to meet in a video summit next week. Biden assured the White House that he was taking a series of measures to prevent a Russian invasion of Ukraine. Meanwhile, Kiev warned of a major offensive by Russia in late January.

Yury Ushakov, Putin’s foreign policy adviser, said the date of the video call “has already been set.” “We are on the verge of reaching an agreement on a time that everyone agrees on.” Ushakov said the video summit will be held after Putin’s visit to India. The head of the Kremlin heads to New Delhi on Monday.

The announcement came after a meeting on Thursday on the sidelines of the Organization for Security and Cooperation in Europe summit in Stockholm between Russian Foreign Minister Sergei Lavrov and his American colleague Anthony Blinken. Kremlin spokesman Dmitry Peskov said the meeting “was a good opportunity for both sides to explain their positions to each other in a clear and understandable way.”

Given the massive deployment of Russian forces on the border with Ukraine, there are fears that Russia will attack the neighboring country. Biden said at the White House that he is planning a series of “initiatives” to prevent this from happening. These measures will make it “very, very difficult for Putin to move forward and do what people are afraid to do.”

Moscow denies such allegations. In turn, the Kremlin accuses Ukraine of allowing the West to arm itself with military equipment, and decries NATO military exercises near the Russian border. Ukraine fears an attack by Russia in a few weeks. “The most likely time to prepare for an escalation is the end of January,” Ukrainian Defense Minister Oleksiy Resnikov said.

Ukrainian intelligence is currently analyzing all possible scenarios. The defense minister warned of “the possibility of a large-scale escalation on the part of Russia.” He estimated that Russia has about 100,000 troops stationed near the Ukrainian border, in Moscow-controlled Crimea, and in areas controlled by pro-Russian fighters in eastern Ukraine.

Kiev does not want to give up NATO membership

Meanwhile, Ukrainian Foreign Minister Dmitry Kuleba flatly refused to give up hoped-for NATO membership and promise other “guarantees” demanded by Russia. Kiev has also called on the United States and its allies to reject the demands articulated by Moscow — also in order to reduce tensions on the Russian-Ukrainian border.

On Wednesday, Putin called on the West to clearly reject any further eastward expansion of NATO. In a phone conversation with Turkish President Recep Tayyip Erdogan, Putin also criticized Kiev for using Turkish-made drones in a conflict with pro-Russian fighters in eastern Ukraine. The Kremlin said in a text that Kiev is trying to disrupt peace agreements in eastern Ukraine through “provocative” military actions.