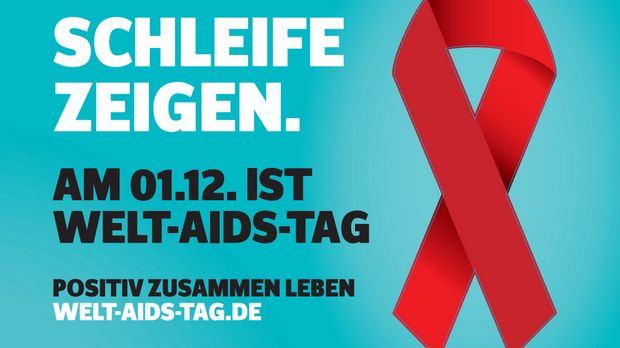 HIV is an acronym for “human immunodeficiency virus”. The virus damages and weakens the human immune system, thus leading to “Acquired Immunodeficiency Syndrome” or AIDS for short. HIV has been spreading in an epidemic since the early 1980s.

AIDS has been an independent disease since December 1, 1981.

December 1st is now known as World AIDS Day. This International Day of Remembrance and Action aims not only to commemorate the dead, but also to encourage people to live together without prejudice and to advance the rights of people living with HIV.

All over the world, organizations, companies, celebrities, individuals and governments engage in work for a good cause on this day.

The red ribbon is a symbol of solidarity with people living with HIV and AIDS patients, known around the world, and is often worn especially on the 1st of December.

Data and facts about AIDS and HIV

Currently, about 38 million people worldwide live with HI. According to official figures, about 36.3 million people have died as a result of AIDS since the beginning of the HIV epidemic. In 2020 alone there were about 680,000 people.

The virus is more common in South Africa. But Asia and Eastern Europe have recorded a marked increase in the number of infections for several years.

So far, about 30,000 people in Germany have died as a result of HIV infection. According to the Robert Koch Institute, the number of people living with HIV in this country is currently about 91,400.

97 per cent of infected people in Germany who have a confirmed diagnosis are on HIV medication. An estimated 9,500 people are unknowingly infected, and therefore have not yet been treated – and thus can transmit the virus.

About 900 people in Germany develop AIDS or severe immunodeficiency every year.

You can find out more about this on Wednesday, December 1, 2021 on “Zervakis & Opdenhövel. Live.” – From 9:15 pm on ProSieben and in the live broadcast.

Lyme disease: the four places you’re most at risk of a...