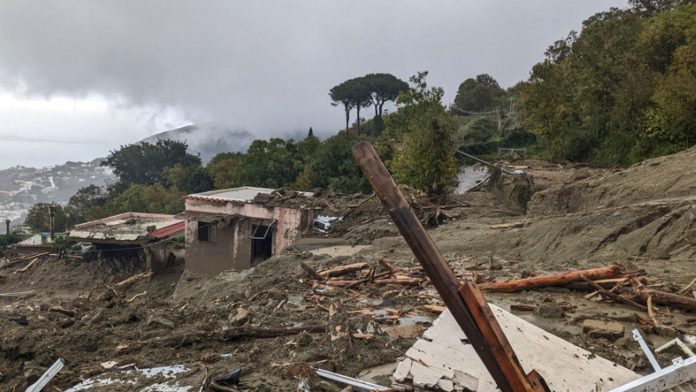 After a landslide on the island of Ischia, many people are missing and dozens are stuck in their homes. Infrastructure Minister Salvini initially spoke of the dead, but the Interior Ministry later contradicted him.

Heavy rains caused a severe landslide on the Italian island of Ischia. Many people are missing, including children. According to the ANSA news agency, they were living in houses destroyed by the mudslide. Several buildings collapsed.

Infrastructure Minister Matteo Salvini initially spoke of eight dead. However, both the Interior Ministry and the President of Naples, Claudio Palomba, later said that there were no confirmed deaths yet.

A violent storm caused an avalanche of mud and debris in the morning. The municipality of Casamicciola Terme in the north of the island is particularly affected. Video posted on Twitter by the local fire department shows images of the devastation: mud, uprooted trees and cars washed out to sea.

reinforcements from the mainland

Residents have been asked to stay in their homes. Many people were taken to safety from their homes, the Civil Defense tweeted. According to ANSA, an estimated 100 people are stuck in their homes without lighting or water.

According to the fire department, emergency services rescued two people from a car that tore it into the sea. A man was rescued from the mud. From the mainland, the authorities from Naples sent more reinforcements to the island. According to the information, boats and helicopters had difficulty reaching the island.

Damaged cars at sea off the island of Ischia. The mudslide swept away several cars.

The mayor of Ischia, Enzo Ferrandino, spoke of a “tragedy”. Because of the declared storm, he was already ordered on Friday to close schools, parks, and cemeteries on Saturday.

Huge differences in elevation on the island

Located in the Gulf of Naples, Ischia is a popular holiday island. Almost 70,000 people live on it. It is of volcanic origin. The differences in elevation on the relatively small island are significant. Conversely, the risk of landslides in heavy rains is high.

The affected municipality of Casamicciola Terme has the second largest port on the island, which has an area of ​​about 46 square metres. Due to its many thermal springs, it is especially popular with spa vacationers. The population of the city is 8,000 people.

President Macron may lose the absolute majority in Parliament