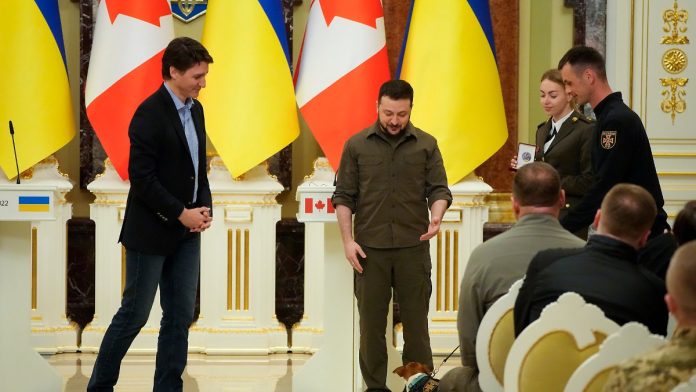 The steadfast fighters of the Mariupol Azovstal Steel Plant make it clear that they do not want to give up. However, President Zelensky currently sees no way to save them. The Ukrainian armed forces lacked the military resources to liberate the city.

Ukrainian President Volodymyr Zelensky ruled out the liberation of the coastal city of Mariupol occupied by Russian forces. “Ukraine does not have enough heavy weapons to liberate Mariupol by military means,” Zelensky said at a press conference with Canadian Prime Minister Justin Trudeau, who traveled to Kyiv today for a solidarity visit.

Zelensky said that at least through diplomatic channels it was possible to get civilians out of the besieged steel mills in Azovstal. But for the remaining Ukrainian soldiers, evacuation will be difficult. “The Russian soldiers, the Russian army, the army command and the political leadership of the Russian Federation do not want to allow our soldiers to leave,” the head of the Ukrainian state said.

Kyiv asked Turkey, Israel, France, Switzerland, the United Nations and the International Committee of the Red Cross to mediate. Recently, the head of the Ukrainian Orthodox Church of the Moscow Patriarchate, Onofry, asked Russian President Vladimir Putin to allow the Ukrainian soldiers to leave.

The port of Mariupol in southeastern Ukraine remained largely under Russian control for several weeks. Over the weekend, the last trapped civilians were evacuated from the city’s steel mill. Hundreds of Ukrainian defenders are said to have holed up in the factory bunkers. They reiterated again this Sunday that they do not want to give up.

See also  Iguana species were thought to be extinct - until now