Home Economy Images on Google Maps show the interior of the Tesla Gigafactory in... 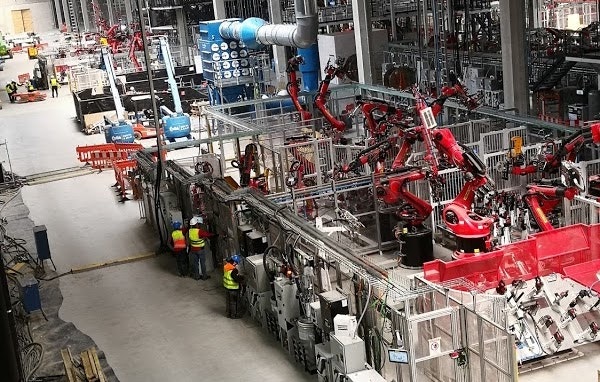 Images have surfaced on Google Maps showing the inside of the Tesla Giga plant in Grunheide. These and other images indicate that the robots and systems are already being tested.

Just a few days ago, the Brandenburg State Environment Agency officially granted permission to Tesla to test the machines at the Gigafactory in Grünheide, Brandenburg. The tests should not be a trial run, the authority emphasized. Now photos from the Tesla plant near Berlin show that construction is already very advanced. It is also said that tests of robots and systems have already begun.

Pictures of the Tesla factory on Google Maps

According to images on Google Maps, uploaded by a user named Bogdan Czyński, the robots and systems technology installed at Tesla’s Gigafactory near Berlin can indeed be found. The images are said to have been taken in June 2020. However, the user has removed the metadata, so it is not entirely clear if it is older. Authenticity cannot be easily checked anyway.

Meanwhile, Drive Tesla Canada platform has more pictures seepingWhich is supposed to show that the electric vehicle manufacturer has already begun testing robots and systems. One of the photos shows a Tesla Model Y bodywork in the front and another in the back, which will likely go through the manufacturing process.

According to Elon Musk, the Model Y will be the first factory-built electric pioneer. Observers see the fact that production is already being tested as a good sign that Tesla will be able to take the first Model Y off the assembly line in Grünheide at the end of the year. At the Gigafactory in Shanghai, it was only supposed to take a few months for production to start after the equipment needed for manufacturing was installed.

However, Tesla in Brandenburg still lacked final approval. Musk last spoke about starting production at Grünheide at the end of the year. The start originally planned for early summer had to be postponed. In the future, Tesla plans to manufacture about 500,000 Model 3 and Model Ys annually at its Brandenburg plant.

Christoph Waltz flees before Christmas and meets Oliver Zipps and a...