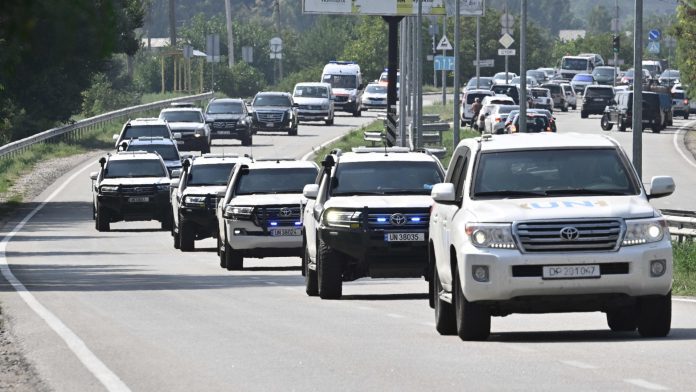 A team of IAEA inspectors have arrived at the Zaporizhia Nuclear Power Plant in Ukraine. The experts were detained for several hours because of the fighting.

An IAEA mission with nuclear experts arrived at the Zaporizhia nuclear plant in Ukraine with a delay of several hours. The team was suspended due to safety concerns. According to Ukrainian information, Russian forces launched grenade launchers and missiles on the road from Zaporizhia to the nuclear power plant near the city of Enerhodar.

The head of the International Atomic Energy Agency, Rafael Grossi, declared upon his departure from Zaporizhia that the mission could not be stopped. You will inspect the power plant and talk to the staff.

We are aware of the situation. There is increased military activity. I was briefed on this and the risks by the commander of the Ukrainian army, but we weighed the pros and cons and we’ve come this far. We do not stop.

“I started my first review”

Upon his arrival, the 14-person international team headed by the head of the International Atomic Energy Agency Grossi began work. “We looked at a lot today and started the first assessment,” Grossi was quoted by Russia’s Interfax news agency as telling reporters. “For me, the work begins now.”

Experts also want to continue work on the nuclear power plant. The representative of the Russian occupiers, Vladimir Rogov, said on Russian state television that the inspectors should stay until at least Saturday. According to Interfax, some experts left the site about four hours later in the afternoon, as did Grossi himself.

The IAEA team arrived in the city of Zaporizhia, on Wednesday, about 70 kilometers from the power plant of the same name. It wants to investigate the extent to which the nuclear power plant has been compromised by fighting between Ukrainian and Russian forces in the region.

In addition, nuclear experts are scheduled to check the condition of the plant with its six reactors, the conditions under which the Ukrainian operating team is working and whether all nuclear materials are still available.

The Ukrainian nuclear authority announced in the morning that one of the two still operating reactors had been shut down due to Russian fire. It said in a message in the Telegram messaging app that the security shutdown has been activated. However, the remaining reactor is in operation and supplies the power plant with electricity.

The two sides repeatedly accuse each other of being responsible for the bombing. Ukraine controls the city of Zaporizhia, and Russian forces have controlled the nuclear power plant since March. However, the largest nuclear power plant in Europe is operated by Ukrainian technicians.