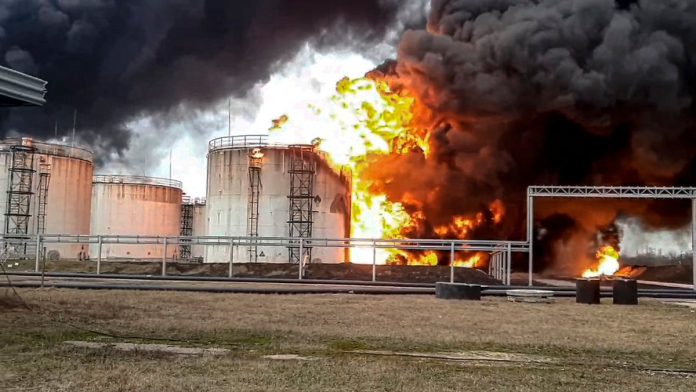 It was said that Ukrainian helicopters again attacked targets on Russian soil. At least that’s what the governor of the Bryansk region claims. It is said that several people were injured. The attack reminds us of an earlier incident. However, Ukraine denied this.

Russia accuses Ukraine of attacking two towns near the border, one of them with helicopters. The Russian Investigative Committee said that two military helicopters carried out at least six air strikes on residential buildings in the Klimovo settlement in the Bryansk region. Seven people were wounded. There were reports of rocket fire on social media. The allegations cannot be independently verified. Videos on Twitter only show burning buildings and clouds of smoke. There is no evidence of a helicopter attack by Ukraine.

The governor of Bryansk had previously reported an attack on a village. “Today, the Ukrainian forces shelled the village of Klimovo,” Alexander Bogomas told Telegram. “The bombardment damaged two houses and injured some residents,” he added. Rescue workers are on site and will “medically take care of the population”. Klimovo is located about ten kilometers from the Ukrainian border and has a population of about 13,000.

The governor of the Belgorod border region also accused the Ukrainian armed forces of bombing the village of Spodaryushino. There were no casualties or property damage, Governor Vyacheslav Gladkov said on his Telegram channel, but the authorities evacuated Spodaryushino and elsewhere.

Lots of question marks after the fuel depot attack

As early as April 1, Russia claimed that Ukrainian helicopters entered Russian territory and bombed a fuel depot near the city of Belgorod. There were no injuries or deaths in the attack at that time. Ukraine denied carrying out the attack. Some military experts also considered this unlikely because the city of Belgorod is about 40 kilometers from the border. Accordingly, the two helicopters would have passed 80 kilometers unmolested over the Russian territory – in Belgorod itself they also flew at a very low altitude, which can be seen in the videos – without being shot or damaged. This would speak of a very weak defense of the Russian army.

Experts stated that the attack on a fuel depot on Russian territory would not cause any serious damage. An attack on a military convoy or military facility would have made more military sense. In addition, for several weeks Russia has claimed that the entire airspace over Ukraine is under its control. A successful Ukraine offensive would contradict this view.

The TASS news agency, citing the Russian Federal Security Service, reported that the Ukrainian side, on Thursday, fired at a border checkpoint where more than 30 Ukrainian refugees were trying to enter Russia.