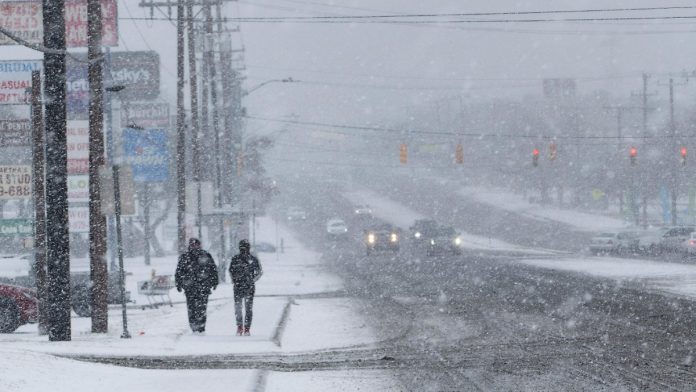 Heavy snowfall in the United States

Global warming was the cause of the extreme cold

The southern United States suffered a severe cold snap in February. Hundreds die and power supplies collapse. Researchers have succeeded in deciphering the cause of the phenomenon.

Scientists have discovered a link between climate change and the emergence of severe winters in North America. Accordingly, the smaller ice cover in the Arctic sea and the larger snow cover in Siberia weaken the polar vortices over North America. Typically a wind zone separates these cold and warm air masses from each other. If weakened, the polar air currents can penetrate the deep south in the mid-latitudes. Judah Cohen’s team at Atmospheric and Environmental Research in Lexington, Massachusetts, describes the process In the magazine “Science” Using the example of extreme cold in the United States in February.

“For man-made global warming, it is expected to intensify some extreme weather events – eg more heat waves and heavy precipitation – but not violent winter weather such as cold air flows and heavy snowfall,” the researchers wrote. So it is not yet clear whether the extreme cold snap in February, which caused a collapse in energy supplies in the southern US state of Texas, is linked to climate change. At least 217 people were killed in the cold snap, and the material damage amounted to nearly 200 billion US dollars, a figure higher than in recent severe typhoons.

Cohen and colleagues recorded the frequency of various high and low pressure patterns from 1980 to February 2021. Air pressure data came from the two lower layers of the atmosphere: the troposphere and the stratosphere. The researchers identified five basic recurring patterns, two of which are associated with a particular strength and two with a particularly weak polar vortex.

Phases of particularly strong polar eddies have become increasingly rare over the past four decades or more, while phases of weaker polar eddies have increased. In particular, the researchers examined a pattern in which the polar vortex is like a rubber band being pulled from the sides. It happened in the two weeks before the massive cold snap in North America.

Using climate models, scientists explored the conditions for the development of this phenomenon. If they identify low polar sea ice cover in northern Siberia and heavy snow cover in Siberia, after one to two months, simulations show an elongated and weaker polar vortex that allows cold air to flow from north to south in North America. “Identification of the initial pattern of expansion events could increase the timeout for severe cold warnings in Asia, Canada and the United States,” the researchers wrote.

“One of the main strengths of Cohen et al.’s study is that it combines careful observational analysis with novel modeling experiments,” wrote Diem Cuomo of Vrije Universiteit Amsterdam in a commentary titled “Science.” The causal links between distant weather processes – here between Siberia and North America – must be intensively deciphered for the mid-latitudes.