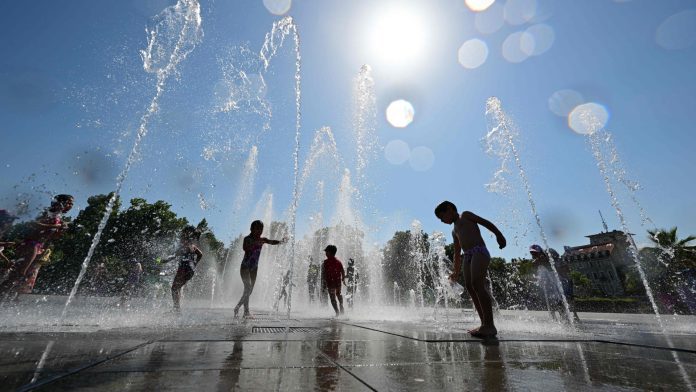 The unusual early heat wave continues to spread. In France, temperatures rise to more than 40 degrees. Ozone alerts have been announced in many places. In Spain, fires destroyed thousands of hectares of land. It’s also getting hotter in Germany.

France continues to groan under an unusually early heat wave: 37 degrees were measured in Toulouse in the afternoon, with a peak expected tomorrow – with temperatures well over 40 degrees. The Weather Service reported the first heat wave since 1947.

37 out of 101 French departments issued a heat warning. There was a red alert level for twelve sections, and the students were given a break free from the heat. Ozone alerts were also announced in several regions, including the east of the country and the greater Paris region. Rising temperatures exacerbate soil drought, which is already a major concern for farmers after the winter and spring droughts. The danger of forest fires is increasing.

Thousands of hectares of land destroyed in Spain

Spain is also affected by the early heat wave. Several fires have already destroyed thousands of hectares of land there. In Sierra del Culebra alone in the northwest of the country, up to 7,000 hectares were damaged, and 200 people had to be brought to safety there as a precaution. There were other fires in Catalonia.

According to experts, drought and severe heat wave that has been going on for several days with temperatures sometimes exceeding 40 degrees in large parts of the country and sometimes high winds triggering wildfires. She added that the fires will not threaten large communities for the time being. “It is impossible to deny that climate change is leading to extreme weather phenomena such as the current heat wave,” said Prime Minister Pedro Sanchez.

The Po Valley in northern Italy is suffering from drought

It is now extremely dry in the Po Valley in northern Italy. It’s experiencing its worst drought in 70 years. In dense agricultural areas, some communities are now rationing water distribution. According to the Coldiretti Agricultural Society, drought threatens half of the cultivated area in the Po Valley and nearly a third of the country’s agricultural production.

Lombardy President Attilio Fontana spoke of a “very difficult situation”. He announced that a state of emergency would be declared soon.

It’s also getting hotter in Germany

In the southern half of Germany, temperatures have already risen to 32 degrees. In the north, on the other hand, it stays a little cooler. Saturday is supposed to be hotter. In the west it can reach 38 degrees locally. During the day, scattered downpours or thunderstorms with heavy rain are likely in the northwest and west. And according to forecasts, Sunday will also be hot again.

Forest fire danger in the Harz and Brandenburg mountains

In this country too, heat combined with prolonged drought sometimes increases the risk of wildfires. The second highest alert level for wildfires is in effect for the Harz region since Friday. Brandenburg reported the highest risk level for forest fires.

See also  Iran: A New Strategy for the Protest Movement

In Thuringia and Saxony-Anhalt, some cities and counties have issued water withdrawal bans from next week. In the state of Baden-Württemberg, this ban already applies locally. Accordingly, all withdrawals of water from surface waters such as lakes or rivers that are not expressly permitted are considered unacceptable. The prolonged drought has caused water levels to drop unusually sharply in many places.

DWD’s director of climate, Tobias Fuchs, warned that in the next few years it could be one degree warmer in Germany than it was in the past three decades. According to Fox, climate change will continue to have a significant impact on Germany in the coming years. According to the Department of Human Development, the trend towards higher average temperatures is already evident this summer.

An observation that also coincides with the predictions of the United Nations. They predict that heat waves will occur more frequently in the future, unusually early and with intensity as happened this week in Europe.

“Unfortunately, what we are seeing today is a harbinger of the future,” said Claire Nullis, a spokeswoman for the World Weather Organization (WMO). Extremely high temperatures spreading from North Africa through southern Europe and forecast in Switzerland and Germany this weekend are most common in July or August, according to the World Meteorological Organization (WMO).