Home World Giants of the seas are also in Europe: a fossil of a... 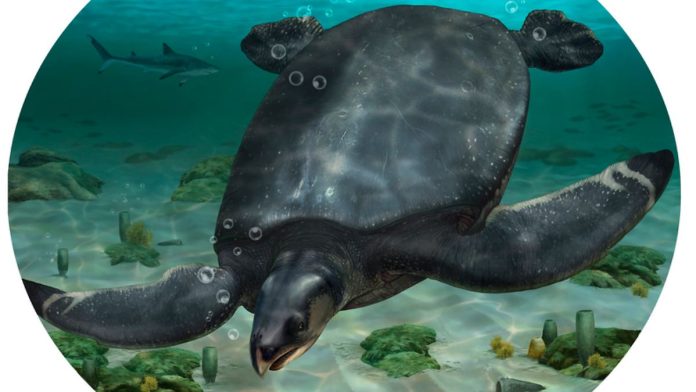 Four meters long and several tons in weight: until now, the fossil remains of such giant sea turtles are known only from North America. But now such a giant is also being caught in Europe, which can certainly compete with the one in America with its 3.7 meters.

About 80 million years ago, giant tortoises roamed the European seas. This is confirmed by the fossil of a 3.7-meter sea turtle found by scientists in Spain. The researchers write that it is the largest sea turtle ever discovered in Europe and one of the largest in the world in the journal “Scientific Reports”.

The largest sea turtles known to date lived in North America during the Cretaceous period, such as those of the genus Archelon. Archelon ischyrus reached 4.6 meters in length and weighed more than three tons. In Europe, the largest specimens reached about 1.5 meters in length. Now discovered in the southern Pyrenees, the species Leviathanochely aenigmatica could rival North American giant sea turtles, which weigh several tons, the team led by Oscar Castillo-Viza of Universidad Autonoma de Barcelona writes.

The turtle lived about 80 million years ago

The remains of Cyclops were excavated between 2016 and 2021. Part of the posterior shield and large parts of the pelvic girdle were preserved. According to the dates, the animal lived from about 83.6 to 72.1 million years ago. The researchers derived his height from the size of his pelvis. The width of the pelvis was just 89 cm less than that of the Archelon (81 cm), and the length was only 14 percent less than it.

The scientists wrote that the discovery shows that gigantism evolved independently in different species over time. It is unclear what exactly the evolutionary processes favored the evolution of Cyclops. In surviving sea turtles, body size is related to several environmental factors, such as hunting pressure—that is, the presence of potential predators—or temperature.

Strikingly in L. aenigmatica is a piece of bone protruding from the pelvis, which is not known to other sea turtles. It is likely related to the respiratory system.

Donald Trump blames tax violations — at the same time as...