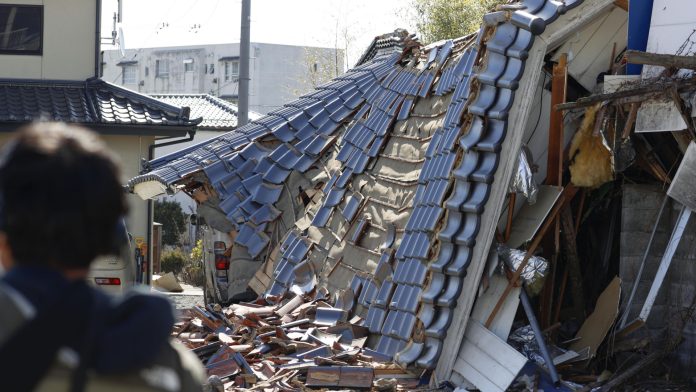 Ruined homes and torn roads: A 7.4 magnitude earthquake shook Japan’s Fukushima region, bringing back memories of the 2011 disaster. At least one person died and more than 160 were injured.

According to new official information, at least one person was killed in the powerful earthquake that hit the Japanese region of Fukushima. Government spokesman Hirokazu Matsuno said two other cases were not a direct result of the quake and that a third case was still under investigation. And 161 people were injured.

At least one person was killed in the earthquake in Japan

The 7.4-magnitude earthquake occurred just before midnight (local time) on Wednesday off the coast of Fukushima at a depth of about 56 kilometers. Meanwhile, more than two million homes have lost power. About 36,400 homes in northeastern Japan are still without electricity, and 4,300 homes are currently without water. An early morning tsunami warning was lifted.

According to the relevant supervisory authority, there were no irregularities in the nuclear debris in Fukushima. The fire alarm was triggered here as a result of the earthquake. The Nuclear Regulatory Authority confirmed that there was no fire. A failed cooling system can be reactivated in a fuel rod cooling pool used for the second nuclear power plant Fukushima Daini twelve kilometers south of the nuclear ruins.

The strong tremors woke up many people in the northeast and other areas, including Tokyo. Local media reported that a man was killed in Soma, Fukushima Prefecture. Two men were also killed in neighboring Miyagi Prefecture when they fainted and fell as a result of the prolonged earthquake.

Many homes were severely damaged by the earthquake and roads were destroyed. Witnesses, including a security guard in Soma, told Kyodo news agency that the parked cars “jumped up and down because the ground was shaking.” Railway company JR East reported that a high-speed Shinkansen train derailed north of Fukushima. No one is hurt. However, 75 passengers and three railway employees were stuck for four hours before they could leave the train.

According to Prime Minister Fumio Kishida, the government is on high alert as more strong earthquakes may occur in the next 2-3 days. Kishida said the government is assessing the extent of the damage. He promised to do everything in their power for rescue and relief efforts. “Please take action first to save your life,” he wrote on Twitter.

Almost exactly eleven years ago, on March 11, 2011, a devastating 9-magnitude earthquake and resulting tsunami devastated the Fukushima region. The flood killed about 20 thousand people. In Fukushima, the result was a massive meltdown at the Fukushima Daiichi Nuclear Power Plant.

Japan lies on what’s known as the Pacific Ring of Fire, where tectonic plates collide. Therefore, the country is regularly exposed to earthquakes. Strict building regulations are designed to ensure that buildings can withstand strong vibrations.

Impressions and ratings after the earthquake in Japan