Home World From the Roman and Etruscan Periods: Italy Returns Millions of Treasures from... 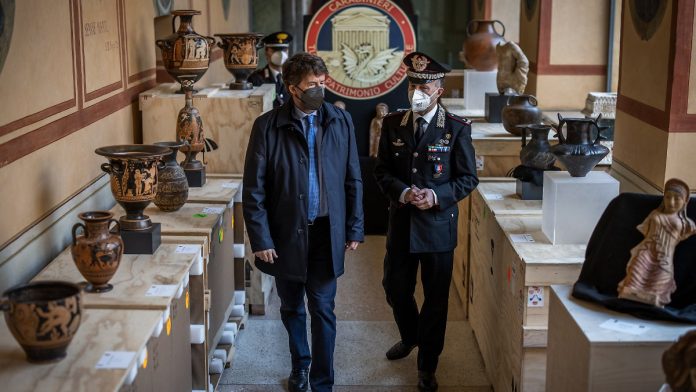 From the Roman and Etruscan period

Italy returns millions of treasures from the USA

They were excavated and illegally resold in the United States: Now the Italian police are transporting hundreds of ancient art treasures worth millions to Italy. Culture Minister Franceschini speaks of an “exceptional comeback”.

Italian police have found about 200 pieces of art, valued at 10 million euros, in the United States. The Carabinieri in Rome explained that they were ancient sculptures, flasks, vases, and busts in clay. “Investigators have reconstructed the chain of illegal excavations via art dealers to American museums, auction houses, art galleries and private collections,” said Roberto Riccardi, commander of the Carabinieri unit for cultural protection.

According to investigators, the objects come from the Roman and Etruscan era, among other things. 160 of them were sent back to Italy, and the rest would initially remain at the Italian Consulate General in New York. Italian Culture Minister Dario Franceschini spoke of an “exceptional comeback”.

Things have returned to their original place. The Carabinieri had worked with the authorities in the United States. Presided over by Italy, the G20 countries agreed at the end of July to intensively pursue illegal art smuggling.

So far this year, the Carabinieri have confiscated nearly 1,700 fake artworks and confiscated more than 23,600 artifacts. The total value is estimated at more than 427 million euros. Approximately 1,190 people were reported during the investigation.

According to Riccardi, there are specialized organizations behind the illegal excavations. They are experts who are familiar with ancient civilizations and thus know that treasures can still be found in tombs today. They usually come at night.