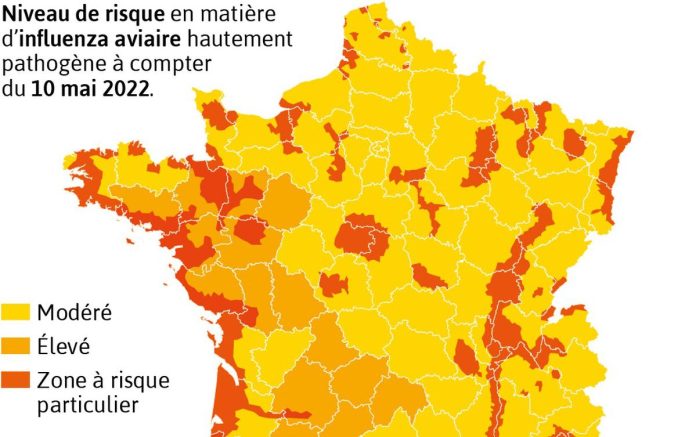 As of May 6, France has recorded 1,374 outbreaks of highly pathogenic avian influenza (HPAI) on farms since the outbreak of the pandemic last November; To limit its spread, 16 million birds were slaughtered, including nearly 11 million in the Great West (Bay de Loire, Brittany).

Continuing restrictions in the West

Outbreaks are still detected daily in certain areas, particularly in the west of the country, which justifies the maintenance of restrictive measures to prevent any spread and recurrence of the epidemic. In this context, the Minister of Agriculture and Food Julian Dinormandy decided to adapt and adjust the level of risk according to geographical regions with an order published on May 10 in the Official Gazette:

The risk level has been reduced to “moderate” in the rest of the capital. This transition to the “moderate” risk level means maintaining poultry shelters only in areas at special risk specified in the decree issued on March 16, 2016 regarding levels of epidemiological risk due to infection of birds with the highly pathogenic avian influenza virus. In particularly vulnerable outdoor areas, travel restrictions and bans on bird gatherings have now been lifted.

See also  For two years, striking numbers for the epidemic