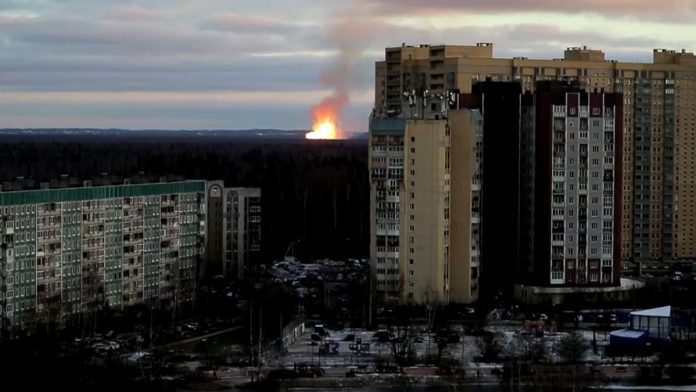 Flames are visible from afar
An explosion in a gas pipeline near St. Petersburg

A gas pipeline has exploded near the Russian city of Saint Petersburg, according to the region’s governor. Pictures on social networks show a huge fire. Nothing is known about the cause of the explosion.

In the north of St. Petersburg, a gas pipeline explosion caused a major fire. “Fire and rescue workers are extinguishing the fire caused by an explosion in a gas pipeline between (villages) Bernardovka and Kovalyevo,” Leningrad Region Governor Alexander Drozdenko wrote on his Telegram channel. There is no information about possible victims or the cause of the explosion.

It was initially said that the LPG filling station exploded. An exploded gas line was later named as the cause of the major fire. According to Drozdenko, there is no danger of fire spreading to residential areas. However, the pillar of fire can be seen from kilometers away, as videos on social networks show.

At the end of September, several strands of the Nord Stream pipeline in the Baltic Sea were torn apart after the explosions. Investigators have since found explosives at the scene. And the Russian leadership, speaking of an attack, blamed the United States or Great Britain for it.