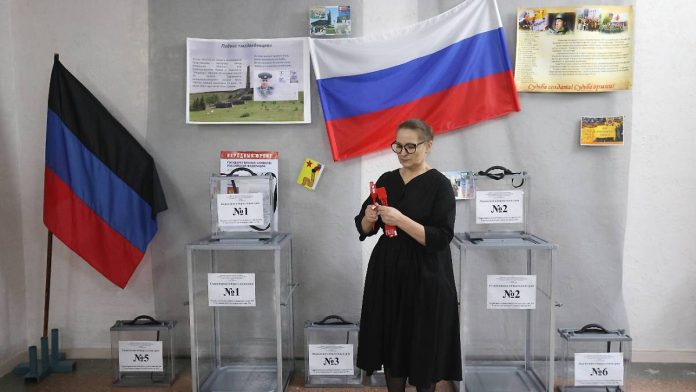 In the face of recent Russian defeats, Moscow is pressing for a speedy annexation of the occupied Ukrainian lands. Since the morning, the occupiers have been going door to door to collect votes. Polls must open only on the last day of undemocratic voting.

Despite sharp international protests, mock referendums on Russia’s annexation began this morning in four Russian-controlled regions of Ukraine. Voting takes place in the breakaway regions of Donetsk and Luhansk in the Donbass in eastern Ukraine and in the Kherson and Zaporizhia regions in southern Ukraine. The “referendums” are due to last until Tuesday, after which Moscow is expected to be quickly annexed.

Separatist leader Denis Pushlin spoke of a historic day in the “Donetsk People’s Republic”, which is recognized by Russia. “This referendum is decisive, it is a breakthrough for a new reality,” he said in a video posted by the Telegram news channel.

Neither Kyiv nor the international community recognizes voting under occupied Russia. These are phony referendums because they are being held without Ukraine’s consent, under martial law and not according to the principles of democracy. Nor is the free work of international and independent observers possible.

The mock referendums were announced shortly after the Ukrainian army managed to retake large areas in a counterattack, especially in the northeast of the country. Hundreds of villages and towns formerly under the control of Russian units from which the occupiers had to flee in haste, returned to the Ukrainians in the Kharkiv region.

According to reports by Russian news agencies, voting began at 7:00 AM CET. Accordingly, the so-called referendums will not be conducted by electronic voting due to the short preparation time, but by paper ballot papers. Pro-Russian officials will go door to door for the first few days to collect votes. Polling stations will only open on Tuesday, the last day.

Russian news agency TASS reported that in Donetsk and Luhansk region – two regions already recognized by Moscow as “people’s republics” – citizens are being asked to answer questions about whether they support “the accession of the republic to Russia”. In Cherson and Zaporizhia, the question in the vote is whether citizens agree to “secession from Ukraine” and integration “into the Russian Federation”.

The head of the Bundestag’s Foreign Affairs Committee, Michael Roth, repeated criticism of the so-called referendums, and also referred to Chancellor Olaf Scholz’s condemnation of ZDF. Roth spoke of a “corrupt land grab” and a “violation of international law” that the West would not accept. “We will continue our support constantly,” he said, also referring to German arms shipments to Ukraine.

See also  Georgia: The West has forgotten South Ossetia, but Putin has not

‘Doomsday Glacier’ in Antarctica: Glacier ‘only sticking to nails’