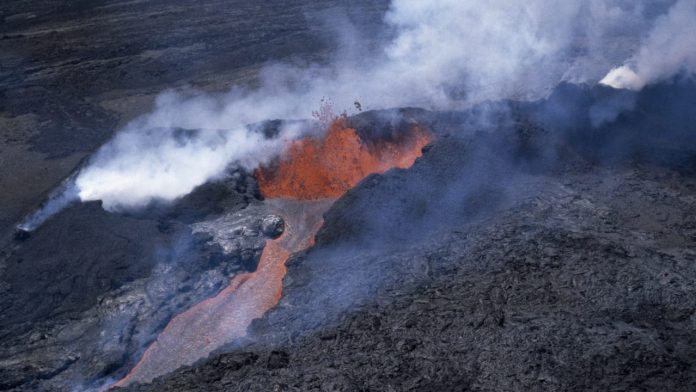 The Mauna Loa volcano can erupt on the Big Island of Hawaii. According to scientists, the largest active volcano in the world in the south of the island is showing increased turbulence, so the number of earthquakes on the top of the mountain is constantly increasing.

The Hawaii County Civil Protection Agency issued a volcano warning as a precaution after recording 36 small earthquakes near Mauna Loa in Hawaii Volcanoes National Park between Thursday and Friday.

Horror for the island’s 200,000 residents, as it’s actually called “The Big Island.” The horror after the eruption of the “younger” Kilauea volcano in 2018 is still in people’s bones. At that time, lava and rocks caused devastating damage, destroyed homes and roads, and severe earthquakes shook the entire Hawaiian archipelago. About 2,000 people had to be evacuated. Since then, Kilauea has repeatedly spat out glowing red lava, although there have been no consequences for the population.

So the fear of the next big bang is great. And even if geologists do not believe that an eruption of Mauna Loa is imminent in the near future, their warning should be taken seriously. So scientists are now also monitoring every little twitch and confirming that lava flows can reach nearby homes within a very short period of time if an eruption actually occurs.

The giant volcano with a height of more than 4,000 meters became very turbulent in mid-September. Scientists said that from the active noise and about five to 10 earthquakes on the mountain, that rate rose to more than 100 on September 23 and 29. Finally, 36 earthquakes twice in a row every day.

Reason enough for the experts at Hawaii Volcanoes National Park to immediately close Mauna Loa Peak to all hikers. The main part of the park is still open, but “all eyes are on Mauna Loa,” said Jessica Viracani, a spokeswoman for the UNESCO-listed park. At the same time, there are serious security considerations to keep in mind. Especially for the so-called volcano tourist, who are attracted by these warnings.

According to the Hawaiian Volcano Observatory, Mauna Loa, which covers half of the island’s 10,500 square kilometers, has erupted 33 times, most recently in 1984.

Shower water: The highest quality water – with a few exceptions