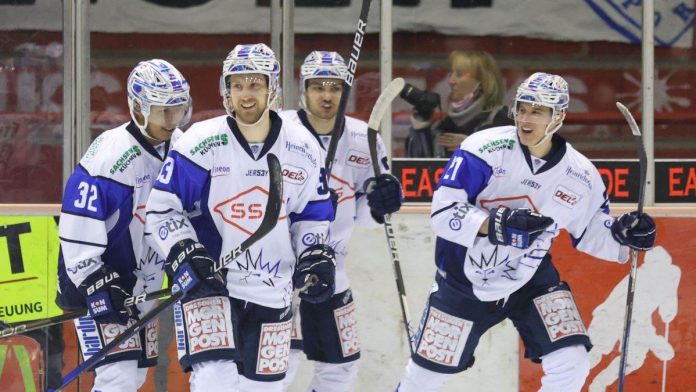 Dresden. Dresdner Eislöwen slowly started on the crucial championship stage. Apparently Andreas Brockmann’s team triumphed in front of 812 spectators at the Bayreuth Tigers with 8:4 (2:0, 5:2, 1:2) and thus defended the lead in the table. The Elbe townspeople celebrated their third success in the fourth and final match against the Tigers. Now there are only two main matches left against the Kassel Huskies. “It was a very good away game, we played tightly for more than sixty minutes,” Brockmann said.

The protected Brockman got off to a perfect start against a small team from Bayreuth. After just 96 seconds, Tigers goalkeeper Timo Herden had to extend a hand behind him. After good preliminary work by Jordan Knakstedt, Vladislav Filin put the ball into the net to make the score 1-0. The guests also clearly dictated what was happening on the ice and put the host side under pressure from the start. Almost logically, Tom Knobloch increased to 2:0 in the 14th minute after a superb pass from Mike Schmitz.

The superiority of the leader became more evident in the middle third. Although the blue and white missed the first majority game to take advantage of, the flocks rang out shortly thereafter. Adam Kiedewicz simply hit the ball and hit the opponent’s goal to make it 3-0 (29). However, the Tigers managed to fall short after two minutes. Cason Hohmann returned the disc behind the goal to Kevin Kunz, who ran with him and beat Janick Schwanderner past Eislöwen to score 1: 3 (minute 31). But Brockmann’s sponsors immediately responded. Bruno Riedel rose to 4:1 after just 54 seconds. For the 19-year-old former Halle, it was the Eislöwen Pro’s number one goal and so of course the puck was saved.

The shooting of the lively target continued. After another minute, Tom Knobloch extended the difference to 5: 1 (32) with his second goal of the evening. David Rundqvist then managed 6:1 (35th place) after a slap shot from Josie Petersen. But the goal of hunger has not yet been satisfied. In the power game, David Suvanto, who simply shot from the blue line, scored to advance 7:1 (36th position). Three minutes before halftime, Bayreuth once again managed to make the provisional score a little better thanks to Kevin Koons with a 2:7 score.

With the start of the final section, Tigers coach Ruben Farkas changed his guard – Lucas Steinhauer was now in the penalty area for Timo Heerden. And the hosts went out on the ice again with impulse. After just 51 seconds, Danny Bendels cut the difference to 3:7 after a pass from Christian Kretschmann. But Ice Lions’ response followed four minutes later. Vladislav Filin regained the old gap with 8:3 (45th minute). Three minutes before the end, Jan Hodisk again improved the score with 4:8.

Wentz’s struggle continues – and raises questions for the ponies