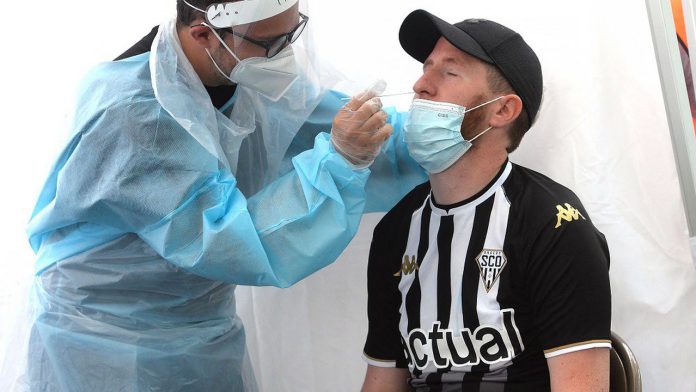 Olivier Veran had warned that the symbolic milestone of 100,000 infections in 24 hours would be bypassed “closer to Christmas than to New Year”. The figures for this Saturday, December 25, confirmed these expectations, with 104,611 new cases of infection discovered in France. This sets a new record since the start of the Covid-19 pandemic.

Like its European neighbors, the country is facing a wave associated with the Omicron variant, which is more contagious than its predecessor, Delta. Evidence that its spread is happening at a high speed: while the tape of 50,000 cases was passed per day on December 4, that number doubled in three weeks, according to data from Public Health France.

In an effort to contain this new wave, Emmanuel Macron will convene the Health Defense Council on Monday by videoconference at 4 pm, one hour before the last Cabinet of the year, during which the bill creating a vaccination card will be introduced. .

New year in the crossfire?

It remains to be seen if other restrictive measures will be taken on this occasion, while the situation remains tense in hospitals. On Saturday, 3,282 Covid-19 patients were in intensive care, or 28 more than the day before. In addition, 84 new deaths were recorded in the hospital, bringing the total number to 95,513 since the beginning of the epidemic.

So far, the CEO has relied largely on accelerating the vaccination campaign, while more than 52 million people have received the first injection and more than 22 million have already received a booster dose.

However, it may be tempting to target New Year’s celebrations, as the Scientific Council recently encouraged it. The latter also warned of the risks of chaos in society linked to the numerous work stoppages, which could prompt the government to revise isolation rules.

Epidemic bronchiolitis in infants: here is a map of affected areas

How diets change the gut microbiota – the practice of healing