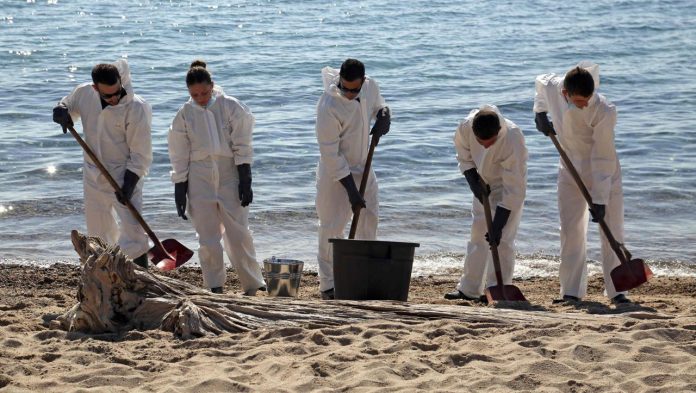 Previously for several days Follow the authorities on the French island CorsicaThe direction in which the oil spill is moving in the Mediterranean. Oil residue has now contaminated a beach on the holiday island. Firefighters cleaned up the coastal area of ​​the Solaro community on Monday.

The responsible prefecture said the oil was distributed along a length of about 500 meters and a width of 50 centimeters on the beach. Pictures showed how several white-clad firefighters removed the small oil residue on Corsica’s east coast.

On Friday, oil was leaking from aircraft The Mediterranean Sea Explore outside the island. During more detailed excursions, several oil slicks, which extended for about 35 kilometers, could be seen. A spokeswoman for the responsible authority said on Saturday that pollution was drifting away from the coast.

The prefecture said access to beaches and swimming in the area are still strictly prohibited. Specially trained emergency services are also battling an oil disaster with two naval vessels at sea. Nearly four tons of oil had been recovered by Sunday.

Authorities suspect the ship’s tank has been illegally emptied. Investigators are now essentially investigating three ships located in a larger area around the contamination. The French government had stressed at the weekend that those responsible would be arrested and punished.

From April, there is a risk of job loss: England has...