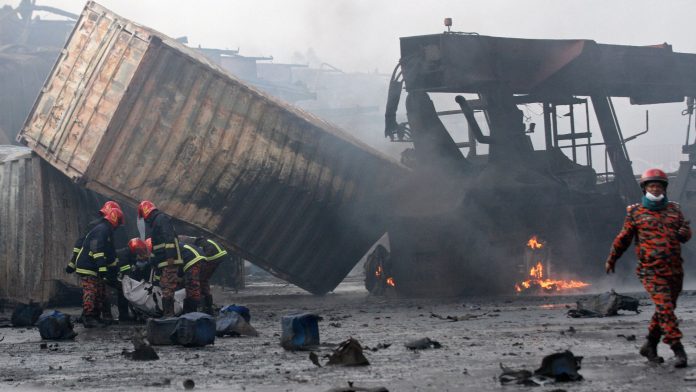 Explosions at a container depot in Bangladesh caused a major fire. At least 49 people were killed and hundreds injured. It is said that chemicals were found in the containers.

At least 49 people have died in a major fire at a container depot in Bangladesh. Authorities said at least nine firefighters were among the dead. The chief of health in charge of the area said that more than 200 people had suffered burns. It is feared that an unknown number of people are still at the site trapped by the fire.

According to a fire department spokesperson, the fire broke out late Saturday evening at the BM Inland Container Depot, a Dutch-Bangladesh joint venture, of unknown cause and was not completely extinguished on Sunday. Ansour Rahman, a spokesman for the fire department, said the explosions in some of the containers made it difficult to put out the fire. Firefighters found chemicals such as hydrogen peroxide in some of the containers. They said it could explode.

The fire broke out near the port city of Chittagong.

Special team by air from Dhaka

According to the head of the Fire Department and Civil Protection, a special team of firefighters was flown from the capital, Dhaka, about 300 kilometers away, to support the local fire brigade. 250 military personnel also helped put out the fire and also tried to prevent the chemicals from spilling into a nearby river.

The warehouse is located 20 kilometers from Chittagong – the country’s largest port – and houses more than 4,000 containers, as well as buildings and sheds.

Fires and industrial disasters with deaths and injuries are more common in the South Asian country. In 2021, nearly 40 people died when a fire broke out on a passenger ferry in December. A fire in a food factory in Dhaka in July of the same year killed 52 people. The collapse of the Rana Plaza building with textile mills and shops in a suburb of Dhaka in April 2013 caused international panic – at that time more than 1,100 people died.

The warehouse handles goods for import and export and is located about 20 kilometers from the country’s main sea port in Chittagong.