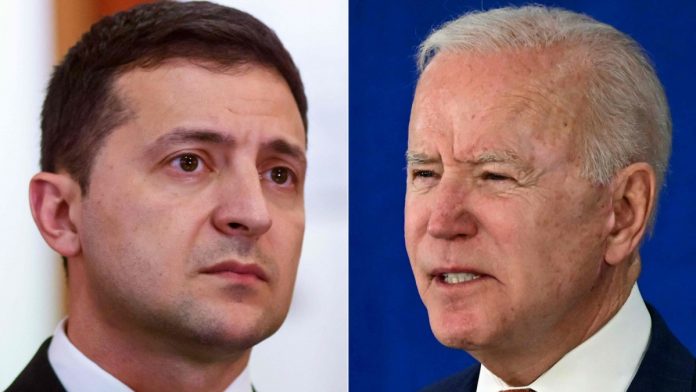 US President Joe Biden assured his Ukrainian colleague Volodymyr Zelensky that he would support him in the conflict with Russia. And the White House in Washington explained after a phone call between the two presidents that Biden made it clear that the United States and its allies “will respond firmly if Russia continues to invade Ukraine.”

Biden and Zelensky also support diplomatic efforts to reduce tensions with Russia. Talks between the United States and Russia are scheduled to take place in Geneva for a period of one week on January 9-10. After that, a meeting of the NATO-Russia Council is scheduled – the first in two and a half years. The Organization for Security and Cooperation in Europe (OSCE) will also hold talks after that.

Zelensky told SMS service Twitter that he discussed “joint actions of Ukraine, the United States and its partners to maintain peace in Europe” with Biden, as well as steps toward de-escalation. He thanked Biden “for their unwavering support.” The United States also supplies Ukraine with weapons.

Zelensky had only stated in his New Year’s address that he not only wanted to return Crimea in the Black Sea, annexed by Russia in 2014, to Ukraine. He said the parts of eastern Ukraine controlled by pro-Russian separatists should return.

The United States has accused Russia of deploying forces in areas on the border with Ukraine for weeks. Fears that the Russian army will invade the former Soviet Republic. Russia denies such invasion plans and in turn accuses Ukraine of deploying additional soldiers to the region.

According to the White House, Biden emphasized that the United States is committed to Ukraine’s sovereignty and territorial integrity. In the event of a Russian attack on Ukraine, the US government has threatened severe economic sanctions that will be coordinated with its allies in Europe. In addition, in such a situation, NATO’s presence should be expanded in its eastern member states. The United States will also provide Ukraine with additional assistance, including the armed forces.

Biden, Who spoke to Putin on the phone on ThursdayIn the conversation with Zelensky, he also emphasized that the Minsk Peace Plan applies to resolving the conflict in eastern Ukraine. He also endorsed the so-called Normandy formula, as announced by the White House. Russia has repeatedly criticized Ukraine for repeatedly violating agreements reached through international mediation. In the Normandy format of four, France, Germany, Russia and Ukraine are trying to resolve the nearly eight-year conflict. According to United Nations estimates, more than 13,000 people have been killed in Donbass since 2014 in fighting between Ukrainian government forces and Russian-backed separatists.

Czech Republic: a tree crashes into a car – two dead,...