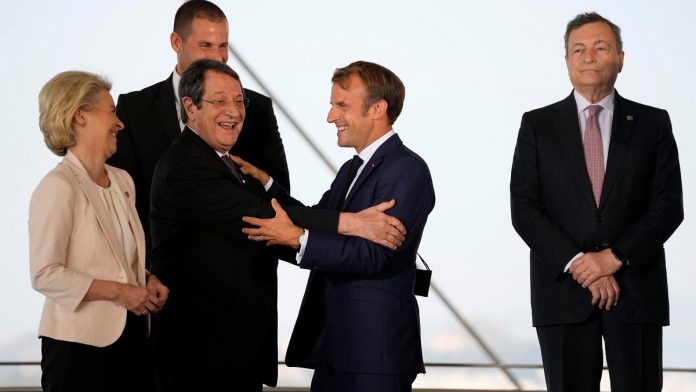 Climate protection in the Mediterranean

The climate crisis is already affecting the Mediterranean region – and the summer fires have shown that tragically. At the summit of the European Union countries bordering the Mediterranean, governments are thus formulating plans to protect the climate. But there is another topic.

At the summit meeting, the eight Mediterranean countries of the European Union and Portugal decided to work more closely together in the fight against the climate crisis. “The best lesson to be learned is the catastrophic fires of summer,” Italian Prime Minister Mario Draghi said in Athens at the so-called UMED 9 summit. “There is no more time to waste.”

In addition to the climate, EU foreign policy and the issue of migration were on the agenda of the meeting. The Mediterranean region is highly vulnerable to the effects of climate change, according to a statement against the climate crisis signed by the participants. Heat waves will come significantly more frequently and intensely, and droughts, torrential rains, floods and wildfires will also disrupt the region.

This already has strong environmental and economic implications. In addition to adhering to the goals of the Paris Agreement and other international climate goals, the paper also contains an intention to plant at least three billion trees by 2030 and a promise to work more closely together in the fight against the climate crisis.

In addition to the climate, it was also about immigration – due to the Afghan crisis, Greece, Cyprus and Italy are especially afraid of a renewed increase in the number of refugees. The relationship with neighboring Turkey was also discussed. Greek Prime Minister Kyriakos Mitsotakis emphasized that there is good cooperation with Turkey under the refugee deal, but again warned that Ankara should not take advantage of migration.

“We will not allow the phenomenon of uncontrolled migratory flows that we saw in 2015 to repeat itself,” he said. At the European level, the participating countries want to work to strengthen the strategic independence of the Union of States. French President Emmanuel Macron said there was also talk of strengthening the areas of defense and security and thus the sovereignty of the European Union.

“We need to be able to stand up to the provocations and threats that affect our region.” It is also important to form your own alliances in order to respond systematically to crises in the Mediterranean region. In their statements after the summit, nearly all participants spoke in favor of greater strategic autonomy for the EU.