Home World “Celebrations” on May 9: Ukraine expects a Russian military parade in Mariupol 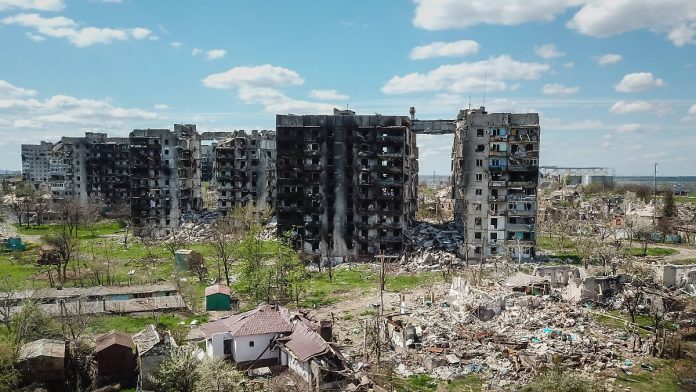 Celebrations on May 9
Ukraine awaits Russian military parade in Mariupol

Russia wants to celebrate in many cities the victory over Nazi Germany on May 9th. According to the Ukrainian intelligence report, “celebrations” are planned not only on Russian soil. The Kremlin is also preparing for a military parade in the nearly devastated southern Ukrainian city of Mariupol.

According to Kyiv, Russia is planning a military parade in the southern Ukrainian port city of Mariupol to commemorate the victory over Nazi Germany on May 9. Ukrainian military intelligence said that the deputy head of the presidential administration in Moscow, Sergei Kirienko, had arrived in Mariupol to prepare for the celebrations.

According to Moscow’s plans, Mariupol should become the center of the “celebrations” on May 9. Currently, “the city’s central streets are being cleaned of rubble, corpses and unexploded ordnance.” The strategically important port city in southern Ukraine was largely destroyed by Russian attacks. Mariupol is largely under the control of Russian troops, only in the buildings of the Azov steel plants are Ukrainian fighters still standing, who, along with many civilians, are holed up in the tunnel system of the factory buildings.

Ukrainian military intelligence said a “large-scale propaganda campaign is underway”. “The Russians should be told stories about the ‘joy’ of the local population at meeting the occupiers,” he added.

On May 9, Russia traditionally celebrates the victory over Nazi Germany with a military parade and speech by Kremlin President Vladimir Putin on Red Square in Moscow. “The military parades will be held in 28 Russian cities this year,” Russian Defense Minister Sergei Shoigu said. Approximately 65,000 participants will be mobilized for this and a display of several weapons systems and hundreds of aircraft will be organized. He did not comment on possible celebrations in Mariupol.

As on the previous day, the Ukrainian side reported heavy fighting around the Azov steel mills on Wednesday. The mayor of the coastal city, Adam Boychenko, said on television that contact with the Ukrainian fighters holed up there was “lost”.

Russia recently denied a major attack on steel plants. “There is no storm,” Kremlin spokesman Dmitry Peskov said. “The Commander-in-Chief of the Armed Forces has publicly issued an order to stop all attacks,” Peskov said, referring to an April 21 order by President Vladimir Putin. Almost three weeks ago, Putin ordered the plant to be surrounded – so tightly that “the fly could no longer get out.” According to Peskov, the Russian army continues to besiege steel plants, interfering only to prevent Ukrainian fighters from reaching the “firing positions”.

Ukraine’s military said on Tuesday that Russian forces launched a large-scale tank attack on steel mills after evacuating nearly 100 civilians from tunnels under the steel mills. On the other hand, the Russian Defense Ministry accused Ukrainian soldiers of taking advantage of the ceasefire, and demanded the evacuation to move to new locations in the vast factory site.

According to Ukrainian sources, many civilians are still stuck in tunnels in the factory buildings. The industrial complex is the last refuge of Ukrainian soldiers in Mariupol, and more than 150 people have been rescued from the site in recent days.

See also  France and Spain Tuscany: Europe is on fire! Tens of thousands of acres are burning | News

Diet: a bodybuilder eats kilograms of raw meat – says the...