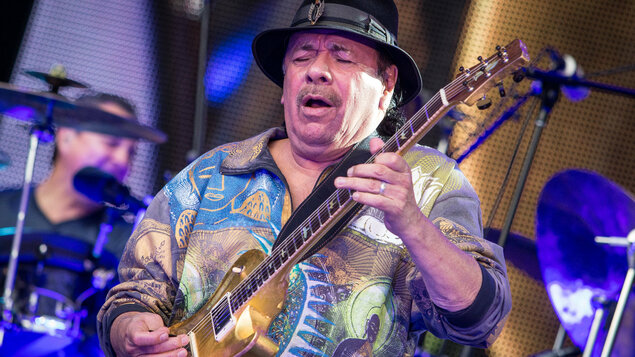 Guitar legend Carlos Santana (“Smooth”) collapsed on stage at a concert in the United States. On Tuesday night (local time) on the American musician’s verified Facebook page, the administration said the extreme heat and lack of fluids would have affected the 74-year-old performing near Detroit, Michigan.

The artist was taken to the emergency room of a nearby hospital for observation, but he is fine. His concert on Wednesday in Burgstown (Pennsylvania) should be postponed. Santana is currently on his Supernatural tour.

The musician collapsed during his concert at the Pine Knob Musical Theater, an outdoor amphitheater in the town of Clarkston. Pictures and videos on social media show how he is treated on stage.

Hours later, Santana took to Facebook himself to thank his fans for their prayers. He and his wife Cindy are fine. “I forgot to eat and drink water, so I became dehydrated and passed out,” he wrote.

Born in Mexico in 1947, Santana rose to stardom with his band at the legendary 1969 Woodstock Festival. The multiple Grammy Award winner is considered the inventor of Latin rock. He is a member of the Rock and Roll Hall of Fame since 1998. Santana’s classics include “Black Magic Woman”, “Samba Pa Ti” and a heavy version of “Oye Como Va”. At the end of last year, he released the album “Blessings And Miracles”. (dpa)

See also  'It's growing again': For Sonia Krause, hair loss is not a tragedy

Heidi Klum: This is how you swing between the years –...

Britney Spears is defending herself against network comments – and no...