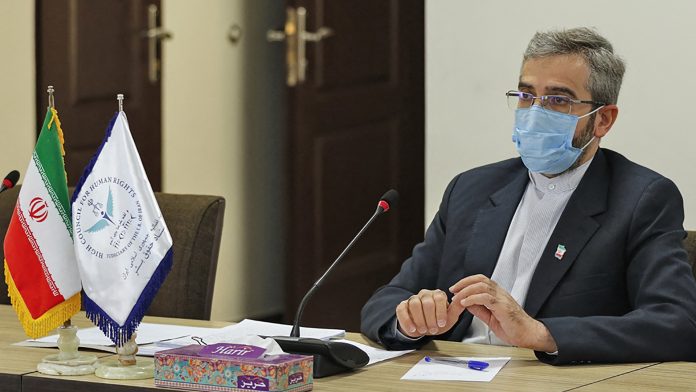 Iran agreed to resume nuclear negotiations in November. Initial talks in Brussels were “very constructive”. Talks have been stalled since the hard-line conservative president was elected Iran’s new president.

Bagheri said the exact date will be announced next week. Prior to the formal resumption of nuclear negotiations, Iran wanted consultations on “remaining differences” in order to enable “result-oriented negotiations”. That is why Bagheri has met Mora in Brussels now. The two diplomats last met for talks in Tehran in mid-October.

The EU initially did not want to confirm the declaration: “There is nothing to announce from our side at the moment,” EU circles said after the meeting.

The European Union has been trying for months to revive the stalled talks in Vienna. They were interrupted in June. The impetus for this was the election of conservative cleric Ebrahim Raisi as Iran’s new president.

The Vienna Agreement, in which Germany, France, Great Britain, Russia and China participate, should prevent the building of Iranian nuclear weapons. In return, sanctions on Iran should be lifted.

The United States withdrew from the nuclear deal with Iran in 2018 under then-President Donald Trump. Then Trump imposed severe sanctions on the country.

See also  Unrest in the former Soviet Republic: Putin sees Kazakhstan as a target of his policy of "international terrorism"

In response, Iran gradually withdrew from many provisions of the agreement. US President Joe Biden, in office since January, has announced that he is ready to return to the nuclear deal if Tehran once again fulfills its obligations.

Just two months after the theatrical release on Netflix - the wait time is rarely short. With a crisp runtime of 96 minutes, it's the...