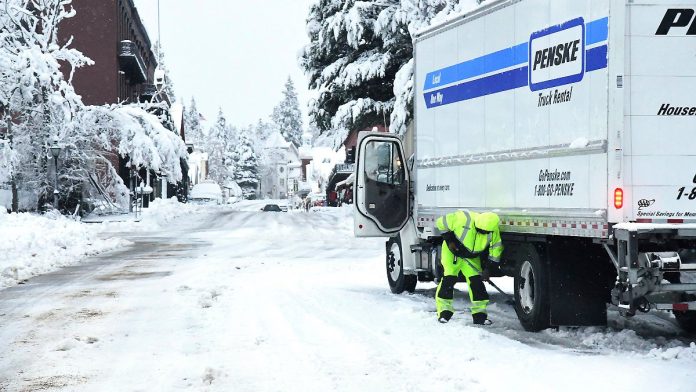 The chaos of winter in California

A winter storm brings unusually heavy snow to the western US – and paralyzes a highway for the third day in a row. While authorities are issuing a winter storm warning for the region, the snow cover is increasing to a height of more than five metres, according to a measuring station.

Heavy snowfall in California’s Sierra Nevada has partially paralyzed traffic in the mountainous region. Large parts of the highway from California to neighboring Nevada were closed for the third day in a row.

After more than 21 centimeters of fresh snow in 24 hours, the mass of snow has now increased to more than five meters in December, according to a measuring station at the University of Berkeley. According to meteorologists, this is the third largest snowfall in a month since 1970 at the gauge station. Authorities issued a winter storm warning for the area.

For the state, reeling from the effects of years of drought, heavy snowfall is a ray of hope as it can replenish groundwater reserves. “We definitely weren’t expecting a rainy winter,” said Andrea Schwartz, a scientist at the Snow Laboratory in the Central Sierra Nevada at the University of Berkeley. Heavy snowfall was a “pleasant surprise”. It’s too early to say the drought is over, “but the Western United States appears to be getting help with it.”

At Seattle Airport in northwest Washington state, snow led to hundreds of cancellations and delays, and planes had to be defrosted. Mayor Jenny Durkan warned of a long cold snap with heavy snowfall. As a precaution, I have declared a state of emergency to be able to activate all resources to protect residents. Winter storm warnings were also applied to large parts of neighboring Oregon.

Meanwhile, southern Texas experienced unusual heat for that time of year. On Christmas Day, 34 degrees Celsius was measured at the Rio Grande village guard station near the Mexican border. Scientists agree that climate change is leading to a significant increase in extreme weather conditions around the world.