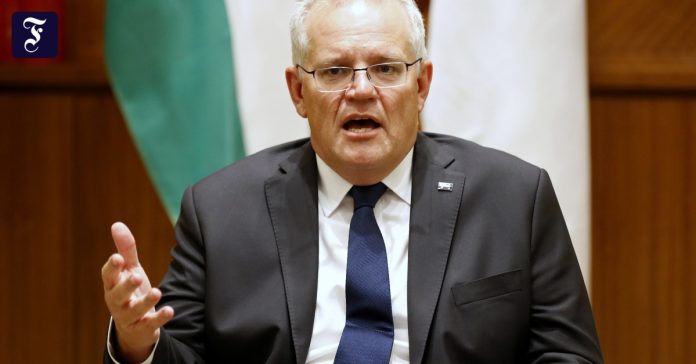 aAustralia has accused the Chinese Navy of endangering the lives of Australian soldiers on a reconnaissance plane by using lasers. Prime Minister Scott Morrison On Sunday he spoke of an “act of intimidation” and “reckless and irresponsible behavior that should not have happened.”

According to Canberra’s Department of Defense, a Chinese laser-guided missile destroyer directed an Australian Air Force P-8A Poseidon in the Aravura Sea off the Australian coast on Thursday. Morrison said blinding the pilot could have made the plane maneuverable and put the cabin crew at risk.

He announced that he would raise the issue through “diplomatic and military channels.” Beijing should explain “why a warship in Australia’s exclusive economic zone took such a measure.” There is no justification for the Chinese approach. The Australian Ministry of Defense also spoke of a “serious security incident”. At first there was no reaction from Beijing.

Tensions between Australia and China have risen since Canberra concluded the AUKUS security agreement with the United States and the United Kingdom in September. The commander of the US Air Force in the Pacific, General Kenneth Welsbach, recently expressed concern that China might try something provocative in the Indo-Pacific “to see how the international community reacts.”

See also  Roaming will remain free for another ten years