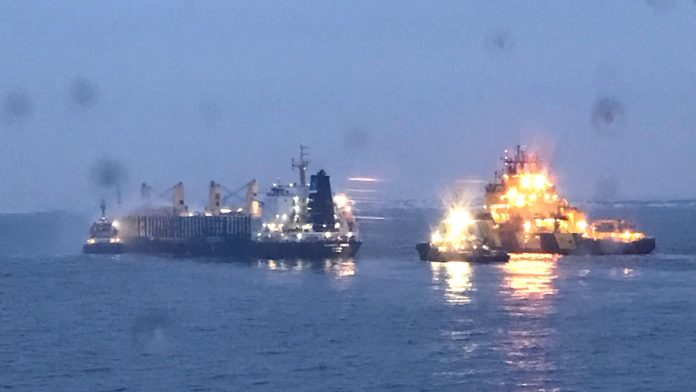 It was supposed to go to Egypt, but a ship with firewood on board caught fire on the high seas. The cargo ship has now reached the port of Gothenburg – and is still burning.

After days at sea with a fire in the cargo, a ship belonging to a shipping company in Hamburg is in the port of the Swedish city Gothenburg was brought. The Swedish coast guard said the ship “Almirante Storni” laden with timber arrived on Saturday morning at Skandia port in Gothenburg alone from the former anchorage off the Swedish west coast. The cargo ship was accompanied by tugs, among other things, as recordings from the SVT radio station showed.

Almirante Storni is now located at Pier 615, where the Municipal Rescue Service has taken over more firefighting work. According to his information, it is now scheduled to bring the cargo from the ship in order to facilitate access to the source of the fire.

The Coast Guard said everything went according to plan on Saturday. “The images we got from the police helicopter show that the cargo is still burning. Now it’s a matter of putting out the fire,” the newspaper quoted rescue director Matthias Henborn as saying in a statement issued by the authorities.

The fire broke out last Saturday. Since then, several ships have worked continuously with water cannons to put out the flames. According to the shipping company, the bulk tanker, which is about 177 meters long, was on its way to Alexandria in Egypt. The cause of the fire is still unclear. There were no reports of injuries so far.

Ahead of the cargo ship’s arrival at the Port of Gothenburg, a spokesperson for shipping company Hamburg NSC announced on demand that everyone involved was now focused on the urgent tasks: securing more hot spots and bringing the vessel to an appropriate port facility in Gothenburg. The situation is under control.