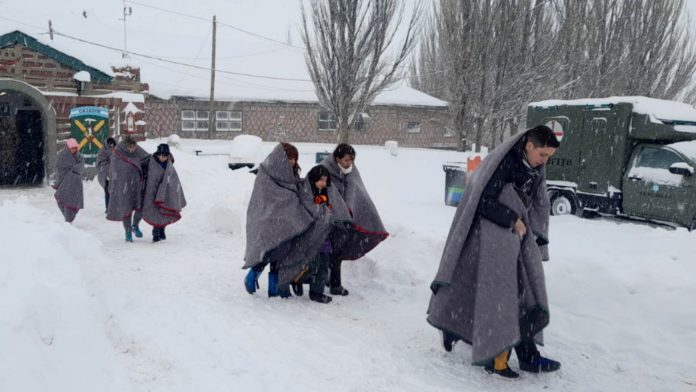 For two days, hundreds of people were stuck in the ice on a mountain pass between Argentina and Chile, in a storm and sub-zero temperatures. Now everyone can be saved. The driveway remains closed at the moment.

More than 450 people have been rescued after a severe snowstorm in the Andes Mountains between Argentina and Chile. This was reported by the Argentine newspaper “La Nacion”, citing rescue workers. According to Telam news agency, those affected have been taken to the cultural center in the high oasis of Ospalata in Mendoza province for medical care and food, which has been converted into emergency housing.

Most of them were tourists from Mendoza who were traveling in the high mountains, but the truck drivers were also surprised by the storm. “The last 60 people have already been shot down by Caterpillar trucks and vehicles,” the regional government of Mendoza wrote on Twitter.

On the Argentine side of the border, 120 people were rescued by police and the military early in the morning and taken to emergency shelters in nearby towns.

The storm started on Saturday after a sudden shift in the winds. More than 300 vehicles fell and were stuck on a road linking Argentina and Chile at the foot of the Andes.

“People were shocked that they spent the whole night outdoors, with strong winds and sub-zero temperatures. It was awful for the children,” La Nacion quoted Fabian Tello, head of the crisis team set up by the municipality of Las Heras. . Dozens of cars were also suspended on the Chilean side.

The mountain pass “Paso Cristo Redentor” at an altitude of 3200 meters, which connects Mendoza with the Chilean capital Santiago de Chile, remained closed at a temperature of less than 11 degrees. Mendoza Province is located about 1,200 kilometers west of Buenos Aires. The region is currently experiencing a polar cold, which is an unusual phenomenon despite the winter.

Snowstorm in the Andes: hundreds of people have snowed