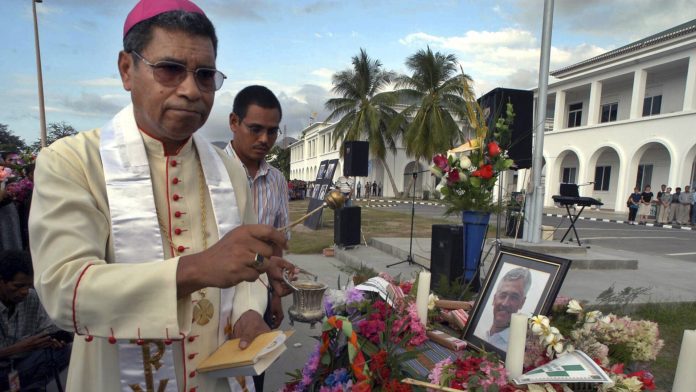 The Vatican has imposed disciplinary measures against Timorese bishop and Nobel Peace Prize laureate Carlos Ximenes Bello after allegations of abuse in the past two years. Vatican spokesman Matteo Bruni said that the responsible authority in the Vatican was informed of the allegations against Bello in 2019. A year later he was denied contact with minors in East Timor. Bello’s administration and freedom of movement were also restricted. The penalty was tightened in November 2021.

The Dutch magazine “De Groene Amsterdammer” earlier reported that Bello sexually assaulted several boys in the 1990s. Inquiries to Bello, the Salesian Order, or the Vatican regarding the allegations were not answered.

“The bishop raped and sexually assaulted me that night,” said a 45-year-old who called himself Roberto and did not want to reveal his real name. Bello gave him the money so he wouldn’t say anything and he will continue to do so.

A 42-year-old man said he was molested by Bello at the bishop’s home in Dili, East Timor. “I thought this was disgusting. I don’t go there anymore,” said the man, who called himself Paulo and wanted to remain anonymous.

National hero and beacon of hope

The newspaper said there were numerous reports of similar cases. The allegations go back to Bello’s reign as head of the Salesian Formation Center in Don Bosco, before he became bishop in 1983. At the time, Bello was not only the powerful leader of the Catholic Church in East Timor, but also a national hero and a beacon of hope for the people, Paolo said.

The bishop took advantage of his position of authority over boys living in abject poverty. Out of fear and shame they did not talk about the events. According to de Gruen, he has spoken to other people affected and to 20 people familiar with the events: church officials, politicians, NGO staff, and experts.

Bello was awarded the 1996 Nobel Peace Prize with future President José Ramos-Horta for his work for the independence of East Timor.

The Nobel Prize Committee particularly praised Bello for smuggling two witnesses to the 1991 massacre out of the country to testify before the UN Human Rights Committee in Geneva as he sought a UN-brokered independence referendum. This led to independence from Indonesia in 1999.

Roaming will remain free for another ten years