Home World After the election defeat in Brazil: Bolsonaro wants to “respect the constitution” 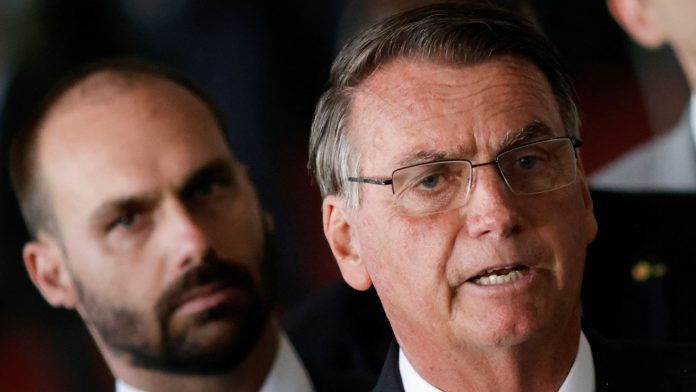 Brazilian President Bolsonaro, who was voted on, spoke publicly for the first time after his defeat. He did not comment on his electoral defeat in his speech – but declared that he would follow the rules of the Constitution.

Two days after his defeat in the Brazilian elections, far-right President Jair Bolsonaro made his first public statement. However, during the short speech in Brasilia, he did not say whether he had recognized the victory of his rival Luis Inacio Lula da Silva. “I would like to thank the 58 million Brazilians who voted for me on October 30,” Bolsonaro said.

He affirmed respect for the constitution and following its rules “as a president and a citizen.” The chief of staff, Ciro Nogueira, said afterwards that Bolsonaro had tasked him with starting the transition process to the successor government.

The election result is very close

In his speech, Bolsonaro also mentioned his supporters, who have closed many highways across the country in recent days in protest of Lula’s election victory. “The current demonstrations are the result of anger and a sense of injustice at the way the electoral process was conducted,” Bolsonaro said. “Peaceful demonstrations will always be welcome.”

Even before the vote, Bolsonaro has repeatedly expressed doubts about the electoral system and indicated that he may not realize the result. After the election, he kept quiet, initially fueling speculation that he might actually contest the result.

Prior to Bolsonaro’s appearance in Brasilia, Communications Minister Fabio Faria announced that the ousted head of state did not want to question the outcome of the elections. According to media reports, several ministers and advisers have already tried to persuade Bolsonaro to admit defeat.

His ally, the powerful parliament speaker, Artur Lera, conceded Bolsonaro’s defeat. The President of the Supreme Electoral Tribunal, Alexandre de Moraes, had already informed Lula and Bolsonaro about the election result by phone on election night. “The result has been announced and approved,” Moraes said.

The election result was also taken by many governments abroad as a fact: Nearly 90 governments congratulated Lula on his election victory, the news portal UOL reported. According to Lula’s team, preparations are already underway to change the government – if necessary without the help of the current head of state.

Brazil – accepted but not recognized. Bolsonaro breaks the silence

Detour through Germany: According to Gazprom, Poland will continue to buy...