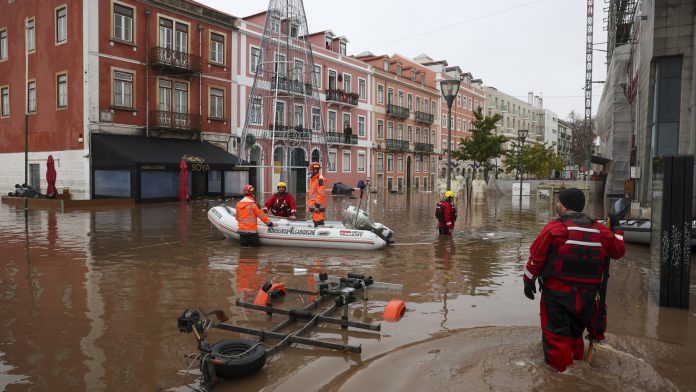 Heavy rains caused severe flooding in the Portuguese capital, Lisbon. Streets and tunnels are flooded, and in some places people are trapped in homes. Meteorologists have announced more precipitation.

After heavy rains renewed, many areas of the Portuguese capital, Lisbon, were flooded. The city administration declared a red alert and called on residents and commuters to stay at home.

Many roads had to be closed. The tunnels and underpasses were full. According to Portuguese public broadcaster Radiotelevisao Portuguesa (RTP), a car was buried by a landslide on a highway and its occupants were taken to hospital.

According to Lusa News Agency, Lisbon Mayor Carlos Moedas spoke of the “chaotic” situation at times. Many roads in the city are impassable because the tunnels are under water. The metro also operates on a limited scale. People have been asked not to leave their homes if possible.

There were already severe floods in Portugal last week, and a 50-year-old man died in a basement. “We’ve never seen this happen so quickly,” Mayor Moedas was quoted by Lusa news agency as saying.

No relief in sight yet

Weather services again announced heavy rain for the rest of the day and into Wednesday. So the situation remains tense at the moment, because the rains increase the risk of renewed landslides in the area.

There were also floods in neighboring Spain. In Andalusia, its streets were flooded with water. The heavy rains followed months of drought in Portugal and Spain. This past summer was also one of the hottest since weather records began. Experts also attribute such extreme weather events to climate change.

Because of the escape route: Police officers demand border control with...