Home World After controversial elections: an attempted coup in Guinea 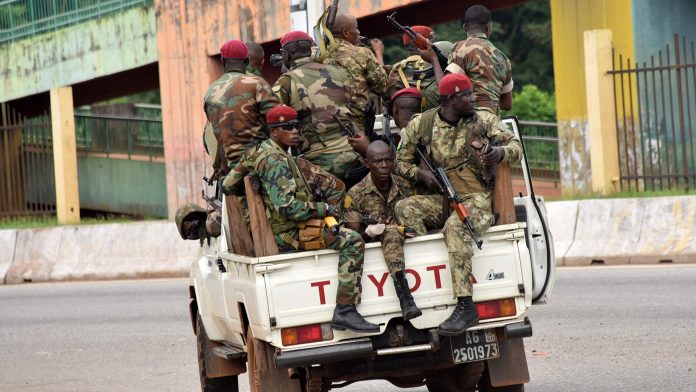 He heard the first long exchange of fire in Conakry, the capital of Guinea, then a colonel said on state television: The government was overthrown. This, in turn, confirms the repulsion of an attack on the presidential palace.

There was a coup attempt in West African Guinea – whether it succeeded is an open question. The commander of a special unit in the army, Colonel Mamady Domboya, announced on state television, the dismissal of the government. A transitional government must be formed. The constitution is void and the country’s borders are closed for a week.

But the Defense Ministry said the attack by the elite unit on the presidential palace in the capital, Conakry, had been repelled.

Exchange of weapons and patrols

Previously, there was a long shootout in the city near the presidential palace. Many soldiers were seen in the streets. The whereabouts of President Alpha Conde is unclear. In a video leaked to Agence France-Presse, the coup plotters claimed that they had captured the president.

Colonel Domboya only announced on state television that the “personalization of political life” was over. “We will no longer entrust politics to a man, but to the people.” He added that he was acting in the interests of the country, and promised to restore democracy. The rebel soldiers called themselves the National Committee for Rally and Development.

President Conde came to power in Guinea in 2010.

Conde passed a constitutional amendment last year that allowed him a third term. In October, according to official information, the 83-year-old emerged victorious in violent and controversial elections, which in turn led to mass protests. Several people were killed in clashes with security forces.

Conde came to power in 2010 – in the country’s first democratic elections since independence from France in 1958. Many saw his presidency as a new beginning for a country that had struggled with decades of corruption and authoritarian rule.

However, his critics have stated that he has failed to improve the lives of the people of Guinea, most of whom live in poverty despite the country’s vast natural resources. Early in 2011, the president barely survived an attack after gunmen surrounded his home overnight and fired rockets into his bedroom. One of his bodyguards was killed in the process.