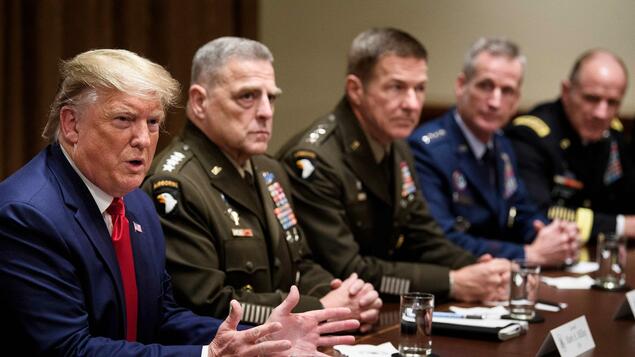 After storming the US Capitol on January 6, according to media reports, Chief of Staff Mark Milley took secret precautions to limit then-President Donald Trump’s legal authority over nuclear weapons. CNN Radio and The Washington Post reported on Tuesday, citing an unpublished book that deals with the end of Trump’s presidency.

Renowned investigative journalist Bob Woodward and longtime Washington Post reporter Robert Costa wrote in “Danger” (Danger) that Millie was shaken by Trump supporters after storming the Capitol. He therefore called for a secret meeting with the responsible commanders on January 8 to ensure that no offensive military strike would take place without his consent.

According to reports, the authors of the book, which is due out on September 21, also have a transcript of a phone call that Milley and Democratic House Speaker Nancy Pelosi made. “You know he’s crazy. He’s been crazy for a long time,” Pelosi said in a Jan. 8 conversation to Millie about Trump. Milley, who was appointed by Trump in 2019, is said to have replied: “I agree with you on all points.”

Pelosi, who holds the state’s third highest office, published a press release after the January phone call. At the time, she stated that she had spoken to Milley to prevent an “unstable president” from “launching military strikes” or ordering a “nuclear attack.” Pelosi said at the time that Republican-elect Trump “couldn’t be more dangerous and we have to do everything we can to protect the American people” and to protect democracy.

See also  Death Valley: A couple leaves a message in the car - a dead tourist

Despite his defeat in the November 3, 2020 election, Trump remained President of the United States until January 20, as required by the Constitution, and thus the Commander in Chief. Strictly speaking, the military could not openly defy his orders.

Milley, now the top military adviser to Democratic President Joe Biden, is said to have had two conversations with his Chinese counterpart at the time, according to reports in the book, in order to prevent the Communist leadership’s fears of a possible US resurgence. attacks. Milley telephoned General Li Zucheng shortly before the US elections, on October 30, and again on January 8. During the second call, Milley is said to have told the Chinese: “We are 100 percent consistent. But democracy can be sloppy sometimes.” (dpa)