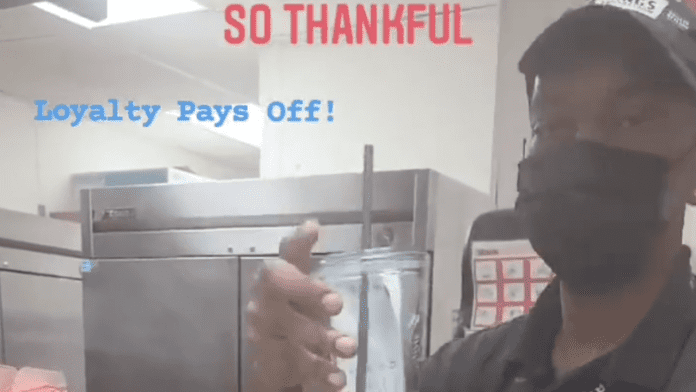 The miserable gift given to a Burger King employee has moved people all over the world. On BILD.de alone, nearly 1.5 million users read the story of Kevin Ford, 54, who received a bag from Tinnef as a “thank you” for 27 years of service without a single day of absence..

This includes: a movie ticket, a box of chocolates, a Starbucks cup, a key holder plus a sign, two pens and two boxes of candy. So far, very stingy.

While it was still unclear on Friday whether the things came from his co-workers or his employer, the 54-year-old has now made it clear that it’s Burger King who brings the gifts together.

Many users on social networks were angry that Fries Crusos (global sales in 2021: more than 1.8 billion dollars) was too stingy. One user wrote, “The guy has worked at Burger King for 27 years and has never received a $27 gift.” Another user on Instagram wrote, “It deserves its own branch!”

Now the mobile network has made and compiled for Ami. And how!

Serena Ford launched her father’s Gofundme campaign. In a very short period of time, 90 thousand dollars, equivalent to about 85 thousand euros, were collected. Too much money for a man who might have had to save a lot for that amount. The 54-year-old wants to use coal to visit his grandchildren.

Many of the nearly 3,000 donors used their donations to say some personal words to Kevin Ford. “God bless you Kevin. Enjoy the time with your family and keep your friendship,” writes a patron. Another commented on Ford’s modesty and diligence: “You are an inspiration.”

It cannot be explained whether the Burger King employee was genuinely happy with the little things about his 27-year-old (“loyalty pays off”) or wanted to mock his employer in the viral clip.

Speaking to TMZ, the 54-year-old said, “I’m grateful for everything I get.” However, he was a bit disappointed because the gifts looked “like things they were lying about and were quickly put together.”

See also  Black Friday 2021 at Nike: 25% off everything with a coupon code

E-mobility is collapsing the power grid: a small town is now...