Home science A project at Lußhardtheim in Waghäusel: “Magic Table” stimulates the brain 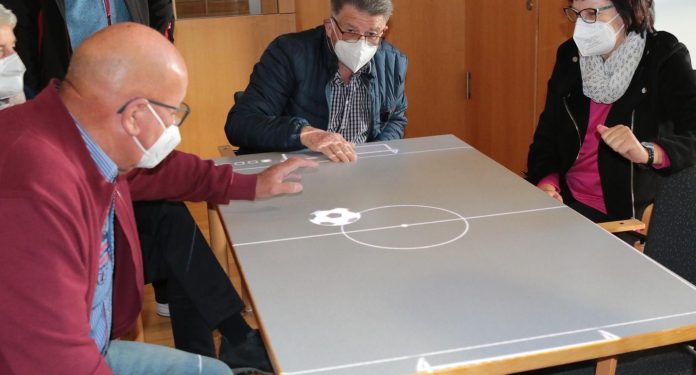 The Dutch word “Tovertafel” means “magic table” in German. Even people with severe dementia can enjoy playing equipment that consists of a computer, accelerometer, and sensor.

Residents and visitors to Kirrlacher Lußhardtheim can look forward to a new attraction. At first glance, a small box is attached to the ceiling of the hall, which seems rather inconspicuous. Below is a table that turns into a display. As if by magic, different colored objects such as balls, flowers, leaves or puzzle pieces move.

project from the netherlands

Seated at the table are Irene Langen, Manfred Schumacher, Cooney and Manfred Klein, all members of Lußhardtheim Waghäusel’s circle of friends. The non-profit association has purchased a gaming device worth 8,500 euros consisting of a computer, a transmitter and a sensor for the retirement home. Tovertafel was developed for people with dementia as part of a doctoral thesis in the Netherlands. It was soon recognized that these magic table games stimulate the brain and connect residents, caregivers and relatives to each other.

“At home residents’ birthday parties, relatives can also bake a virtual cake together,” says Connie Klein, head of the Friends Circle. Many games are offered at different levels of difficulty. “This allows us to individually respond to the needs of our residents,” says future home manager Marvin Friedel. It is said that playing together at the magic table, according to the German translation of Tovertafel, also encourages people with severe dementia. Initial tests showed that previously little moving residents suddenly stretched out their arms and had fun.

The sense of community is enhanced

Above all, the magic table also supports social interaction. For example, players can let the predicted butterfly sit on their hand and then send it to the next table. Or coloring with pictures by touching them thus enhancing the sense of community among the residents. The four tested players from the circle of friends especially enjoyed playing tabletop soccer. Above all, Irene Langen, Manfred Schumacher, Connie and Manfred Klein realized that this investment enriches the lives of the residents of Kirrlacher Lusshardtheim.

Palm oil can promote the spread of tumors in the body

Blind people are partially regaining their eyesight, thanks to a new...