Home science Why does the sense of smell sometimes fail? 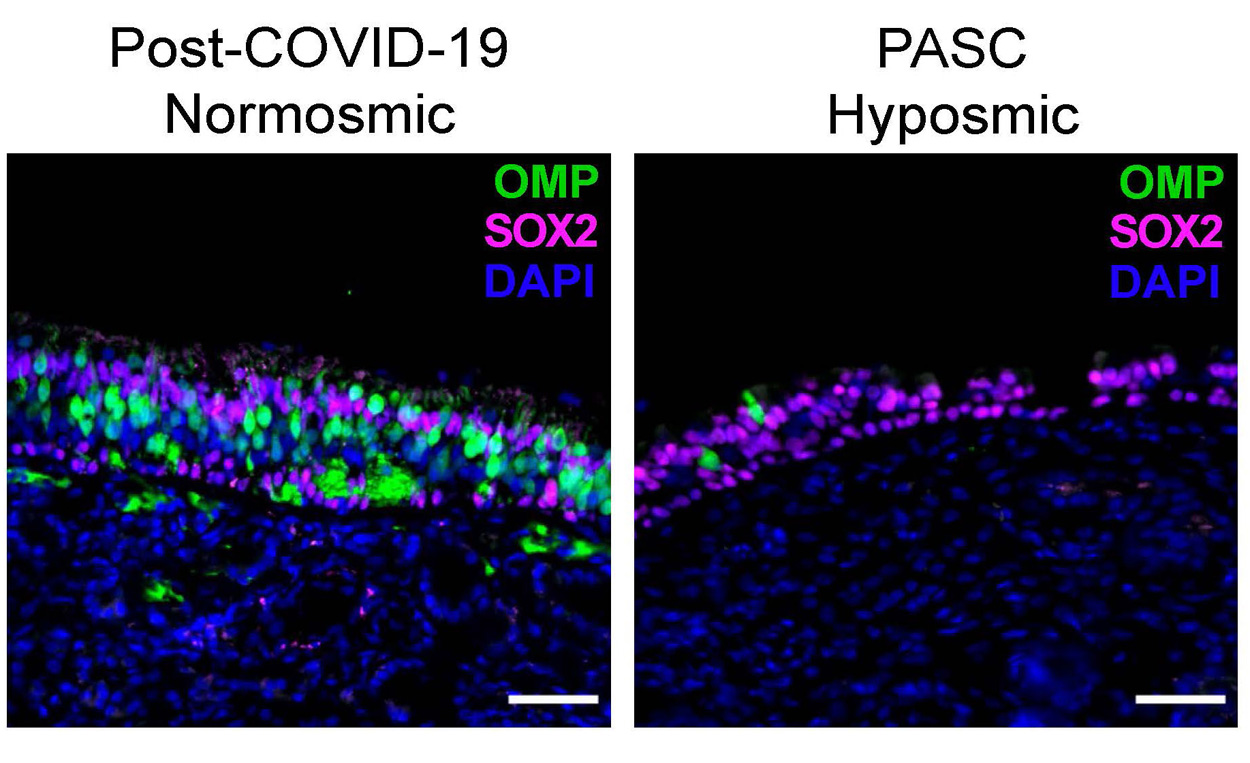 After surviving a Covid-19 infection, some people still experience a loss of smell months or years later. A study now shows that one of the reasons for this is an ongoing inflammatory reaction in the olfactory tissue in the nose. The immune system attacks the olfactory neurons so that their number decreases. The new findings could help develop treatments so that sufferers can regain their sense of smell.

A typical symptom of Covid-19 infection is the disappearance of the sense of smell. This is probably because the SARS-CoV-2 virus attacks the so-called olfactory epithelium in the nose, which contains the sensory cells that relay olfactory information to our brain. Animal studies have shown that gene expression in these olfactory cells changes during infection with the Covid-19 virus and that inflammatory processes prevail. This can be very stressful for those affected: the scent of Christmas fir trees remains hidden from them, as does the nuances of the taste of their food.

Look for clues in tissue samples

“In most patients who experience loss of smell associated with Covid-19, the body’s natural repair processes regain function shortly after the virus is eliminated,” writes a research team led by John Finley of Duke University in Durham. After a week or two, most sufferers can smell and taste again. “It just doesn’t work for some people,” says Finlay colleague Bradley Goldstein. “We need a better understanding of why the sense of smell persists in this subgroup of people months to years after infection with SARS-CoV2.”

To do this, the team examined a total of 24 tissue samples from the noses of those who had recovered, including nine patients who had experienced loss of smell after infection with the Covid-19 virus. The researchers found that no traces of the Covid-19 virus were detected in any of the patients. samples. However, samples from patients who did not regain their sense of smell continued to show an inflammatory response. The analyzes revealed that the tissue had been infiltrated by T cells that secrete the inflammatory messenger interferon-gamma. In addition, the composition of other immune cells was also altered. So-called CD207+ dendritic cells, which are also involved in inflammation, were enriched, whereas anti-inflammatory M2 macrophages were present to a lesser extent.

See also  Amazing microworlds: This is what it's like when cancer cells die

The number of olfactory neurons also decreased in people with persistent loss of the sense of smell compared to people with a normal sense of smell. The researchers suspect that the reason for this lies in the constant attack by the immune system. “The results are amazing,” says Goldstein. “It’s almost like an autoimmune-like process in the nose.” Although the current study focuses on the sense of smell, the researchers believe that similar processes could also play a role in other symptoms of long Covid, including fatigue, shortness of breath typical of this syndrome, and problems concentrating.

The new findings could help develop future treatments that eliminate the causes of odor loss. “We hope that modifying the abnormal immune response or repairs in the nose of these patients will help restore at least some sense of smell,” Goldstein said. The nose is particularly accessible for treatments, as medications can be administered locally without causing systemic effects. From the researchers’ point of view, one possibility could be, for example, locally inhibiting immune cells and thus enabling olfactory cells to regenerate.

Why should you be wary of alternatives to disposable plastic dishes