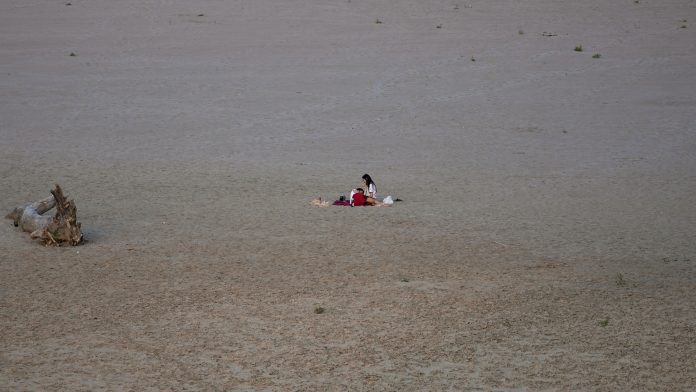 Northern Italy is experiencing its worst drought in 70 years, and a major fire has broken out in Rome. The government declared a state of emergency in several regions. Spain and Portugal are also suffering from severe drought.

The government of Italian Prime Minister Mario Draghi has declared a state of emergency in five regions due to drought in the north of the country. This allows authorities to order immediate measures such as water rationing, bypassing usual regulations.

As the government announced after a cabinet meeting, the state of emergency in the regions of Emilia-Romagna, Friuli-Venezia Giulia, Lombardy, Piedmont and Veneto will apply until the end of the year. The regions around the Po River are affected, the region where about a third of Italy’s agricultural production originates. It’s experiencing its worst drought in 70 years.

Water levels in Lago Maggiore and Lake Garda are much lower than normal at this time of year. The Tiber, which flows through Rome, also has low water.

The government also announced that it would provide 36.5 million euros in emergency aid. According to previous media reports, Draghi is considering appointing a commissioner to combat drought, similar to how the government created a special position to combat the coronavirus pandemic.

In Rome, a large fire broke out in a park in the northwest of the city, a few kilometers from the Vatican, according to the fire department. A helicopter supports the units on the ground in extinguishing the fire. In the city center, ash partly rained from the sky and a high column of smoke was seen. Initially, there were no reports of injuries. Emergency services brought children from two sports centers to safety.

See also  The energy crisis: the thorny question of who stands by a weak Germany

On the popular holiday island of Sicily, the highest level of forest fire warning is applied in many provinces, for example around Palermo and Messina. On Monday, the Civil Defense reported five requests for support from firefighting aircraft from Sicily and Lazio, which surrounds the capital, Rome. Other requests came from Calabria, Puglia and Venice in southern Italy. Officials said five fires had been brought under control.

Spain and Portugal are also suffering from severe drought. According to a study published in Nature Geoscience, parts of both countries are becoming drier than they were 1,000 years ago. The reason for this is a change in the high pressure area of ​​the Azores due to climate change. This has a significant impact on the weather and long-term climatic trends in Western Europe. According to the study’s authors, winter precipitation is “vital” to the ecological and economic health of the Iberian Peninsula.

Previous studies have not been able to show whether human-made climate change is responsible for changes in the climate in the North Atlantic – and now the authors say they have found the link.

The operator releases gas from the still intact Nord Stream 2...