Home Economy Volkswagen is building a new plant for the futuristic model Trinity in...

Nothing stands in the way of the new Volkswagen plant in Wolfsburg: its supervisory board has finally given the green light. From 2026, the future electric model Trinity will be built there. Eyes turn in the direction of Tesla.

Volkswagen’s supervisory board has begun construction of a new plant for the futuristic central electric Trinity model in Wolfsburg. The group is spending 2 billion euros on the plant, and work is due to start in the spring of 2023.

As indicated in previous decision-making rounds, the completely redesigned production site will be built in the immediate vicinity of the headquarters: on the north side of the former site in the Warmenau district of Wolfsburg.

“In this way, we are sustainably enhancing the competitiveness of the flagship plant and giving the workforce strong long-term prospects,” core brand head Ralph Brandstätter said after consulting with the oversight committee on Friday. Trinity production is scheduled to begin in 2026.

At the same time, the main plant for electric cars and other combustion cars will be opened and will subsequently be fundamentally transformed. With the Trinity plant next door, Volkswagen wants to catch up with US rival Tesla in terms of production technology, among other things. But it should also be a conversion model on many of our sites.

See also  Investor Post: Finally! Hydrogen stocks are back on the way to success!

The Americans also got approval for their new plant in Grünheide, near Berlin, on Friday – just about 200 kilometers as the crow flies from Volkswagen headquarters and about two years after construction began with only initial approvals. Like Tesla, Volkswagen aims to produce a production time of ten hours per Trinity car in its “Giga factories.” An all-electric model should have the company’s own software and have plenty of network technology, even with autonomous systems.

Trinity is being developed on a new high-volume platform called SSP. During its lifetime, it has been designed to form the basis for over 40 million vehicles of the Volkswagen Group. For the head of the Labor Council, Daniela Cavallo, the decision is an important stage in the reorganization of the headquarters – there have recently been heated discussions in Volkswagen about untapped capabilities during the chip crisis and the late start of electronic models in Wolfsburg.

Long before Trinity, the home site will receive part of the ID.3 production of the compact electric car from 2023. Within Europe, this was previously made in Zwickau, Saxony. “Our corporate roots remain the main strength of the group and continue to grow in importance,” Cavallo said. “We need the project above all in order to transform, that is, to continue to provide work for the employees we now have on board,” she told dpa recently.

Lower Saxony’s prime minister and Volkswagen supervisor Stefan Weil (SPD) has made it clear that the full production of the car plant in his state must become CO2-neutral in several stages. With the decision to build a second plant in Wolfsburg, the group also wants to make sure the new projects are more relevant. “The biggest advantage of this solution is its efficiency,” said human resources manager Gunnar Kilian of the German Press Agency (dpa). “In this way, we do not burden the start of production of new cars at the main plant with large-scale conversion work and at the same time can be converted according to the new plant model.”

Trinity also plays a major role in the restructuring of vehicle development. At the new developer headquarters “Campus Sandkamp”, which costs 800 million euros and is expected to start construction in 2022, responsible board member Thomas Ulbrich wants to closely link operations with the work of IT experts and other departments.

According to Cavallo, it has also been discussed with management that we are “expanding the areas of battery, charging and digitization around Trinity here in Wolfsburg”. There is already a efficiency center in Salzgitter, and the battery cell plant will be connected there. More European cell plants are planned, according to VW, the locations have not yet been officially decided except for Skellefteå in Sweden and are being negotiated with politicians due to economic conditions. 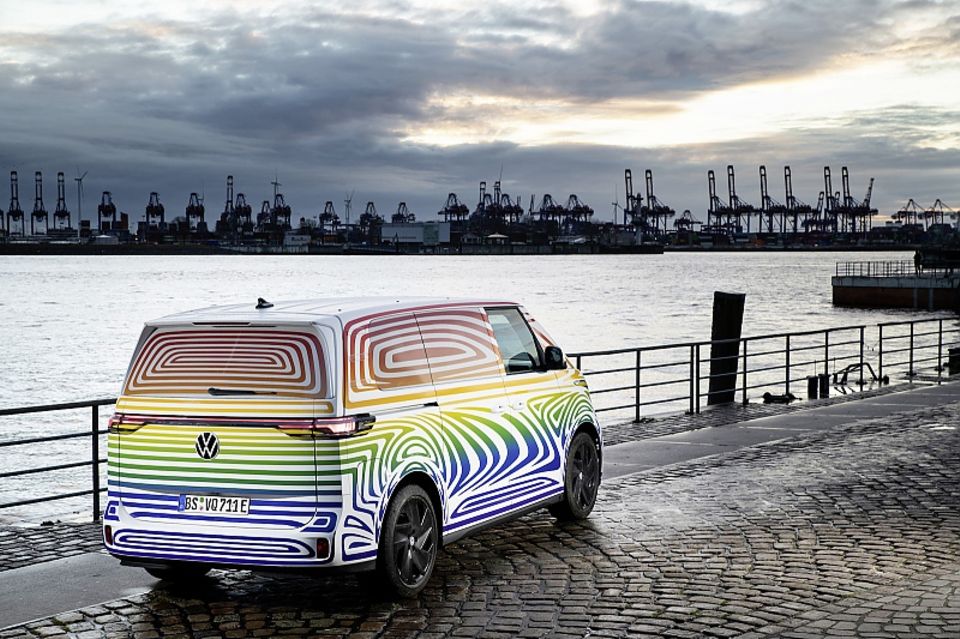 VW ID.Buzz Hamburg The colorful look is still camouflaged and will not appear in the series.

In principle, the VW Supervisory Board had already approved Trinity’s plans at the end of 2021 – and the exact construction site was still open. The prime minister there, Dietmar Wojdick (SPD), described the permit to build the Tesla factory in Brandenburg as “a little ray of sunshine in difficult times”: “We worked hard together.” Production of electric cars could begin in a few weeks.

Tesla initially set up the plant at its own risk with 19 early permits. Company President Elon Musk had originally hoped to be able to start production at Grünheide as early as mid-2021. In the first phase, up to 500,000 cars were planned per year with about 12,000 employees. Volkswagen completed just under 400,000 cars in Wolfsburg last year, and the main reason for the decline since the late 1950s has been a lack of chips.

Regarding environmental regulations, the group announced that it would “exchange information closely with responsible authorities and interest groups.” In Grünheide there have been protests by residents and conservationists, and part of the site is located in a water protection zone.