Home science Viruses as a trigger for Alzheimer’s disease, MS and co? Certain... 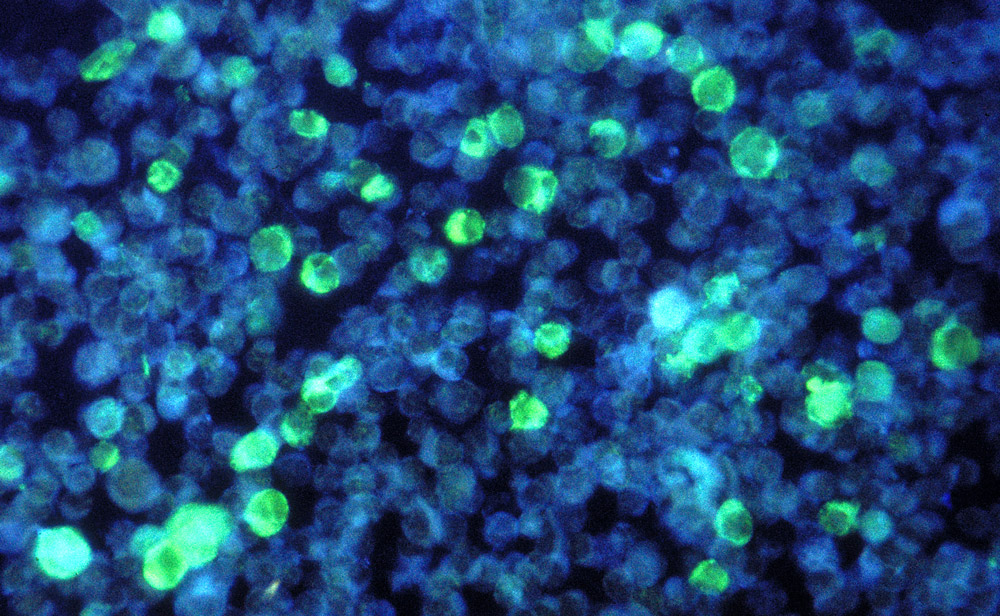 Late viral effects? Infection with certain viruses such as influenza, varicella-zoster and Epstein-Barr may increase the risk of developing neurodegenerative diseases. This is suggested by analyzing the health data of about 800,000 people. Although the data cannot show any causal relationships, only correlations, they are consistent with previous indications of possible viral triggers for Alzheimer’s disease, multiple sclerosis, and other neurodegenerative diseases.

Despite extensive research, the causes of neurodegenerative diseases are only partially known. In addition to environmental factors such as aluminum and fine dust, viruses have also been discussed as potential triggers. a clear notice This was followed by a study in 2022, stating that the Epstein-Barr virus, which causes glandular fever in adolescents and adults, increases the risk of developing multiple sclerosis. Also for Alzheimer’s disease Several studies have already suggested this viral effectPostage can play a role.

Search for clues in vital databases

To do this, Levine and her team first evaluated the health data of more than 300,000 people from the Finnish vital database FinnGen. They focused on neurodegenerative diseases such as Alzheimer’s, amyotrophic lateral sclerosis, dementia, multiple sclerosis, Parkinson’s disease and vascular dementia. For all of these diseases, they looked for possible statistical links to previous viral infections, including influenza, chickenpox, Epstein-Barr, viral pneumonia, meningitis, hepatitis and viral encephalitis.

Statistical evaluations revealed 45 associations between past viral infections and neurodegenerative diseases. In order to validate these findings, the team also evaluated around 100,000 datasets from the UK’s British Biobank. In fact, 22 of the associations also found in this dataset were confirmed. In most cases, a viral infection and a diagnosis of neurodegenerative disease are about a year apart, but there have also been cases with a 15-year difference.

See also  Severe menstrual pain: is adenomyosis the cause?

“The strongest association was between exposure to viral encephalitis and Alzheimer’s disease,” says the team. Influenza, along with pneumonia, was significantly associated with five of the six neurodegenerative diseases studied. We were also able to replicate the association between Epstein-Barr and multiple sclerosis with our data.”

The causation is not yet clear

However, it is not yet possible to conclude whether these statistical correlations really reflect causal relationships. Because reversing cause and effect is also conceivable: People with an undetected but already existing neurodegenerative disease could be more susceptible to certain viral illnesses.

“We already know this from animal models and were able to observe it more frequently in Alzheimer’s patients during the coronavirus pandemic,” comments Martin Corti of the Helmholtz Center for Infection Research in Braunschweig, who was not involved in the study. “People who had Alzheimer’s disease before they became infected were at risk of developing a severe course of Covid-19.”

However, Korte considers it entirely plausible that causal links are behind the associations revealed in the study. His research group showed in mice that influenza infection also activates the immune system in the brain by aggressively stimulating the immune system — potentially damaging nerve cells in the process. “Our hypothesis is that this neuroinflammation could increase the risk of developing neurodegenerative diseases,” says Korte.

Flu vaccination as a prevention of Alzheimer’s disease?

Levine and her team note that vaccines are already available against several viral infections that may increase the risk of neurodegenerative diseases. “It is conceivable that these vaccines may offer a way to reduce the risk of developing neurodegenerative diseases,” the team says. However, before one considers appropriate vaccination recommendations, it must be established whether appropriate vaccinations can actually reduce the risk of Alzheimer’s disease and CO.

“This is exactly what we are currently investigating in our lab,” Korte says. “In the mouse model, we can clearly see that, unlike infection, the influenza vaccine protects against long-term damage to the brain.” More studies should now show whether these results can be confirmed. If so, this would be an additional strong indication of a mechanistic relationship between viral diseases and neurodegenerative diseases. (Neuron, 2023, doi: 10.1016/j.neuron.2022.12.029)

Health: Study: Even a short vacation can be relaxing

Areas of France where there are very ticks … or not

A study finds that this is the ideal amount of sleep...