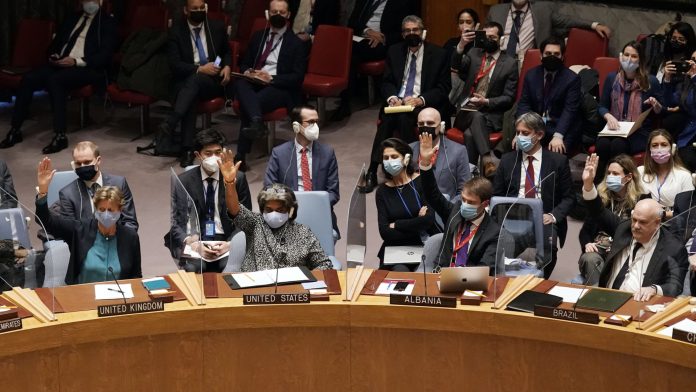 The UN Security Council resolution against the Russian invasion was not adopted. Moscow had vetoed it, and China abstained from the vote.

Resolution against the Russian invasion of Ukraine failed in the UN Security Council. As expected, Moscow vetoed the text in a vote at the most powerful body at the United Nations in New York – but China, along with two other countries, abstained.

Eleven of the Council’s 15 members voted in favor of the text. Western diplomats saw this as a success in their attempt to isolate Russia diplomatically and drive a wedge between Moscow and Beijing.

The resolution should condemn the aggression “in the strongest possible terms”.

The draft resolution, available to dpa, condemns the Russian aggression “in the strongest possible terms” and reaffirms Ukraine’s sovereignty and territorial integrity as well as its independence and unity. Demands an immediate withdrawal from Russia and a return to the Minsk Agreement. The text, drafted under the auspices of the United States, states among other things that the Security Council must decide “that the Russian Federation immediately, completely and unconditionally withdraw its armed forces from the territory of Ukraine within its internationally recognized borders.”

With Russia wielding veto power in the Security Council, as well as China, the United States, France and Great Britain, acceptance seemed impossible from the start. However, the United States and its Western allies had hoped that they could largely isolate Moscow diplomatically.

Negotiations for this continued until the last minutes before the vote – the text was changed again later to prevent China from vetoing and winning the approval of shaky candidates. However, the latter did not materialize due to India and the UAE abstentions.

The Taliban displays its supercars