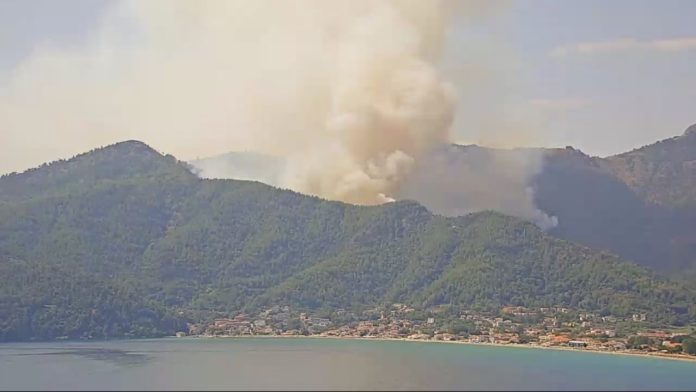 Athens, Greece) – Devastating fires threaten upcoming holiday paradise: On the Greek island of Thassos, a forest fire broke out in the Lefki region on Thursday evening, and the fire brigade was still battling the flames in the morning. The village had to be evacuated.

The fires are raging out of control. As a precaution, the order was issued to evacuate the village of Quinira. According to the deputy governor of Kavala, Christos Politis, to protect residents and tourists from the thick smoke and not because the place is in danger of fire.

Hope gives emergency services and residents that the wind has died down in the meantime.

The fire reportedly broke out in two places. This was noticed within minutes thanks to the patrols of dozens of volunteers in the wider area of ​​Panagia and Potamia.

After months of drought, high temperatures and strong winds, conditions prevail that can turn any small fire into a massive forest fire. In addition to arson, meteorologists also name climate change as a cause.

According to the Civil Protection, more than 13,000 hectares have been burned in Greece so far this year. also in France Destructive fires are currently raging, as in Deutschland and complete Europa This summer, fires destroyed large areas. (jbr, dpa)