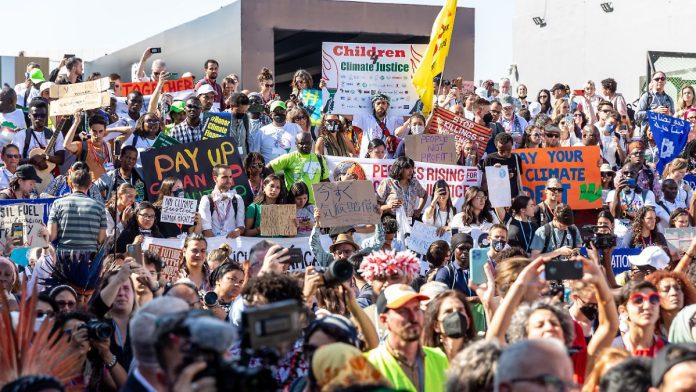 Basically, the rich countries of the world promised poor countries to help them financially to deal with climate change. In Sharm el-Sheikh, the topic became officially on the agenda of the Climate Summit for the first time – but talks have stalled.

At the World Climate Conference in Egypt, a dispute arises over the financing of climate-related damages in poor countries. According to the environmental organization Greenpeace, many rich countries are hindering progress, including the USA, Great Britain and Australia. Yp Sanyo, who leads the Greenpeace delegation to the COP27 climate summit in Sharm el-Sheikh, Egypt, spoke of a “disappointing but not surprising” delay tactic. According to the Guardian, US Climate Commissioner John Kerry said at a press conference that the US was “100% ready to talk”.

The term “damage and loss” is used to discuss how the consequences of climate change are borne together in poor countries, which often contribute less to the causes of damage. It is usually understood to mean the damage caused by extreme weather events and the consequences of slow changes, such as rising sea levels and gradual desertification. It is about consequences that go beyond what people can adapt to, or about situations that lack the means to adapt.

The debate over payments from wealthy industrialized countries has not progressed for years. Germany, too, has never accepted any commitments in the past. At the opening of this year’s climate conference, participants from nearly 200 countries agreed to formally put the topic on the agenda for the first time. Poor countries demand commitments from rich countries. UN Secretary-General António Guterres described progress on the issue as the “first test” of this year’s conference.

Gap between actions and goals

For negotiators, the question of how to bridge the huge gap between what countries have promised in terms of climate protection measures and what is needed to achieve the Paris climate goals remains at least as pressing as the financial dispute. At the weekend, even companies like Amazon, Nestlé, Microsoft and Ikea, which are often criticized for their environmental impact, called for compliance with the 1.5-degree goal in a joint appeal with about 200 other companies and organizations. They explained that each tenth of a degree is important. Therefore, every effort must be made to mitigate the effects, cost and suffering of any transgression.

Hundreds of activists who protested against the use of dirty energy sources under massive restrictions also made this request at the COP site in Sharm El Sheikh. “Sea levels are rising and we are rebelling,” chanted the demonstrators as they marched through the conference square. The protest was the largest since the start of COP27 and very small compared to the demonstration at COP26 in Glasgow a year ago. At the time, tens of thousands of protesters demonstrated across the Scottish city. In Egypt, freedom of expression and assembly are severely restricted, and protests are virtually banned. The Sharm el-Sheikh demonstration came under the supervision of the United Nations.

In Europe, on the other hand, thousands demonstrated: in the open-air mine of Garzweiler for lignite, for example, more than 1,000 people protested in order to preserve the city of Lützerath. In London and other British cities, thousands have taken to the streets to demand more consistent climate policies. There were also demonstrations about the climate in Lille, France, the capital Paris and other European cities.

See also  A political message in space? Astronauts aboard the International Space Station wear the colors of Ukraine