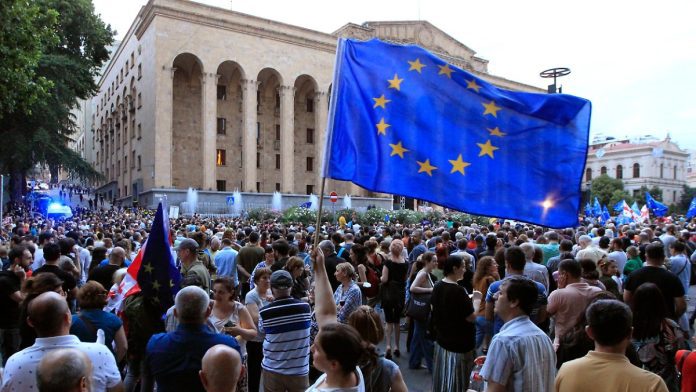 Moldova and Ukraine are officially candidates to join the European Union, while Georgia is not. They say that it does not meet the requirements. So 120,000 Georgians protest that the goals will be achieved quickly and put enormous pressure on their government.

In the Georgian capital Tbilisi, about 120,000 people took to the streets in support of joining the European Union and against their government. The protesters waved Georgian and European Union flags and called for Prime Minister Irakli Garibashvili to resign – a day after the European Union refused to award him the title of candidate country.

“We, the people of Georgia, demand the resignation of Irakli Garibashvili and the formation of a new government that will implement all the reforms demanded by the European Union,” said one of the organizers of the rally. “We are giving the government a week to meet the demands,” he said, as the demonstrators chanted, “Resign.”

Organizers announced another mass rally on July 3, which will end only “after the rule of the oligarchy is eliminated” – a reference to former Prime Minister Bidzina Ivanishvili. Ivanishvili is the richest man in Georgia and is considered a strongman behind the scenes in the ruling party, although officially he no longer plays a political role.

“We are free people, free countries and we will always be free. Ukraine will help Georgia find its way to Europe,” Ukrainian President Volodymyr Zelensky said, addressing the crowd in a video message during the protests. He said that Ukraine and Georgia stand together forever to the applause of the masses.

Garibashvili said his government wanted to meet the EU’s requirements in time “so that we can obtain candidate status as quickly as possible”.

See also  Austria does not want to accept refugees from Afghanistan

The EU Special Report sounds the alarm: many shortcomings, hardly any...