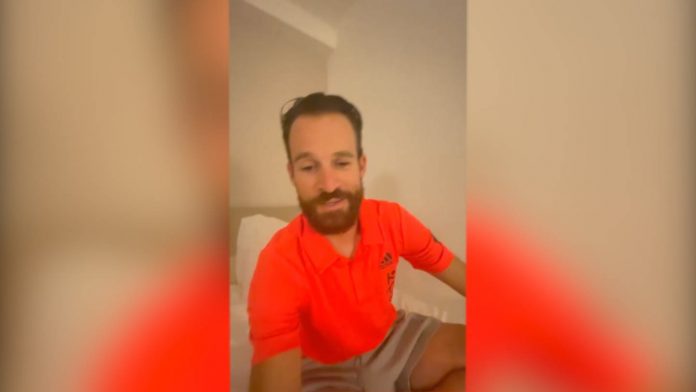 There is hardly fresh air, little exercise, almost rice with soy sauce – according to Simon Geschke from Freiburg, more and more athletes with coronavirus are complaining about the “Olympic prison” in Tokyo.

Simon Geschke is halfway happy again. Berliner is still banned from leaving his hotel in Tokyo, but at least two sponsorship packages from the German Olympic Sports Federation have put a smile on his face. “Today is a good day,” Geschke said first on Instagram. Vegetarian received a food package and a bike with roll. So, on Wednesday morning he was at least able to “participate” in the Olympic round in the individual time trial.

In addition, the German Embassy intervened in the meantime. In a video message to SWR Sport, he said: “With the argument that my CT’s value was very good and that this even allows travel in accordance with European and legal regulations, I was actually tested today.” If the result of this and other PCR tests are negative, he can return to Germany in a few days.

So there is a possibility to improve gifts. Six Olympians from the Netherlands who tested positive for the coronavirus are still complaining of prison-like conditions in a quarantine hotel. Reshmi, the taekwondo fighter, said that she and the other athletes are stuck in their hotel rooms without fresh air for days, and are only allowed to leave the “Olympic prison” once a day to buy food – which is also the “same thing every day” for Ojeng.

On a sit-down strike, I fought for at least a quarter of an hour of fresh air per day. After seven or eight hours and lengthy negotiations, hotel management finally agreed to allow the athletes to stand supervised for a quarter of an hour in an open window once a day, said Dutch skater Candy Jacobs. Who also uses his hotel room for training purposes.

DOSB President Alphonse Hormann showed sympathy and promised to do more to free gifts from quarantine as soon as possible. The head of the League also told the German news agency DPA about the basic measures taken by the Japanese authorities: “As the responsible person and head of the delegation, I say: It is good, right and important that we move constantly.” The regulators’ strict approach found “unreserved consent” from DOSB. “Even if I said as a person: ‘Damn it, it’s very annoying,'” Horman added.